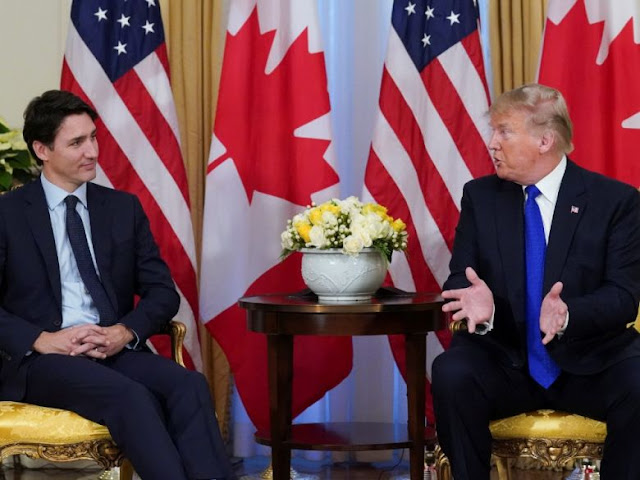 “And honestly with Trudeau, he’s a nice guy," Trump added after a long pause. "I find him to be a very nice guy."

The president went on to suggest Trudeau was upset that he'd been critical of Canada failing to meet a 2 percent commitment to defense spending during their one-on-one meeting on Tuesday in London.

"They should be paying 2 percent," Trump said. "So I called him out on that, and I’m sure he wasn’t happy about it, but that’s the way it is."

The Canadian Broadcasting Corporation posted a 25-second clip late Tuesday that showed Trudeau, French President Emmanuel Macron and British Prime Minister Boris Johnson having an animated conversation about what appeared to be Trump's lateness to bilateral meetings earlier in the day.

"He was late because he takes a 40-minute press conference off the top," Trudeau said, referring to Trump's lengthy Q&A at the outset of meetings with him, Macron and the NATO secretary general.

"You just watched his team’s jaws drop to the floor," Trudeau said.

Macron could be seen gesturing with his hands and responding, but his remarks were inaudible.

The world leaders did not appear to realize they were being recorded.

He said his comments were largely related to Trump's announcement during their own bilateral meeting that the G-7 would be at Camp David.

The video could roil relations between Trudeau and Trump, who is notoriously averse to public criticism.

World leaders openly laughed at him during his 2018 speech to the United Nations General Assembly in New York after he boasted that his administration had accomplished "more than almost any administration in the history of our country in its first two years."

The president later told reporters that the U.N. attendees "weren't laughing at me, they were laughing with me."