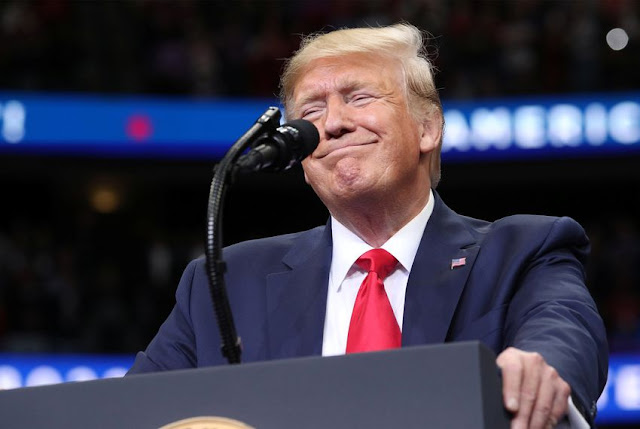 President Trump used a speech before a group of young conservatives Saturday to tout legislative victories while unloading on House Democrats over impeachment and jabbing at the 2020 Democratic presidential field.

Trump claimed his administration had “achieved more in this month alone than any president has achieved in eight years in office,” while criticizing his potential opponents as “extreme leftists” and “beyond socialists.”

The president also criticized Republicans who do not support his administration’s agenda, claiming "Never Trumpers" are “the dumbest human beings on earth.”

Trump addressed the crowd of young conservatives at a conference hosted by Turning Point USA in West Palm Beach, Fla.. The address comes days after the House voted almost nearly along party lines to approve two articles of impeachment accusing him of abusing his office in his dealings with Ukraine and obstructing the congressional inquiry.

Trump on Saturday called House Speaker Nancy Pelosi (D-Calif.) “crazy” and complained about the impeachment vote, claiming Democrats have no case to impeach him. He claimed they are pursuing an “illegal unconstitutional, and hyper-partisan impeachment.”

“They really don’t believe in democracy, they can’t,” Trump said.

The president criticized Pelosi for signaling she may withhold the articles of impeachment before she sees how a trial would take place in the GOP-controlled Senate. Pelosi has expressed concerns that Senate Majority Leader Mitch McConnell (R-Ky.) will not preside over the procedure fairly.

“In fact, there’s no impeachment, their own lawyer said there’s no impeachment,” Trump said, apparently citing a Bloomberg News opinion piece written by Harvard Law professor Noah Feldman, arguing Trump wouldn’t be impeached until the House submits the articles to the Senate. Other legal experts have disagreed with Feldman’s assessment.

“It’s so unfair. She has no case,” Trump continued. “They are violating the Constitution."

Trump also used the speech to tout recent legislative achievements, including the defense policy legislation that he signed just one day prior that established his long-sought Space Force and paid family leave for federal workers.

Trump mentioned the new United States-Mexico-Canada (USMCA) trade agreement, which was just passed by the House of Representatives after his administration reached an agreement on the deal with congressional negotiators. House Democrats have also claimed the achievement as a victory.

Trump mentioned his efforts to build up the military and secure new trade agreements and highlighted the low unemployment numbers as evidence of his administration’s success.

“We’ve achieved more in this month alone than any president has achieved in eight years in office, if you really think about it,” Trump claimed.

“We’re replacing the NAFTA disaster with the new USMCA,” Trump continued. “Except you have some globalists who don’t like it.”

When Trump asked if there were any “globalists” in the room, the crowd booed a resounding no.

Trump was introduced Saturday evening by conservative radio host Rush Limbaugh, who began his remarks by declaring climate change is a “hoax.”

As the president made his way on to the stage, many conference attendees stood on their chairs to snap photos of the president. The song “God Bless the USA” played as he waved to those in the crowd.

Trump knocked the 2020 Democratic contenders throughout his remarks, calling those on the other side “extreme leftists” and recycling old nicknames he has frequently used to attack Sen. Elizabeth Warren (D-Mass.) and others.

Trump began his remarks by jabbing at former Vice President Joe Biden for mixing up states.

“If I were sleepy Joe, I’d say, 'it’s a Saturday night in Ohio,'” Trump quipped. “He does it a lot. There’s something going on up there.”

All of the candidates in the Democratic field, the president said, “want to destroy what we’ve built.”

Trump’s at times rambling remarks resembled his speeches at campaign rallies. He criticized the so-called “fake news,” at one point gesturing to reporters covering the event, suggesting that they didn’t want to cover his efforts at a recent NATO meeting to press other countries to spend more on defense.

Trump also championed his efforts to build a wall at the U.S. southern border with Mexico, inspiring some chants from the crowd.

And he ripped the so-called “Russia witch hunt,” a term he uses to refer to the FBI's investigation into his 2016 campaign’s contacts with Russia — a probe that eventually prompted the investigation by former special counsel Robert Mueller.

Trump seized on a new Justice Department inspector general report criticizing the FBI’s handling of a surveillance warrant application used to wiretap a former campaign adviser, repeating his claim that it proved his campaign had been “spied” on. The inspector general did not find that there was any illegal surveillance conducted on members or associates of Trump's campaign.

Trump described the young conservatives in the crowd as "fearless young leaders ... staring down the hatred of the radical left.”

“I’m profoundly grateful to all of you – the whole country is,” Trump said.