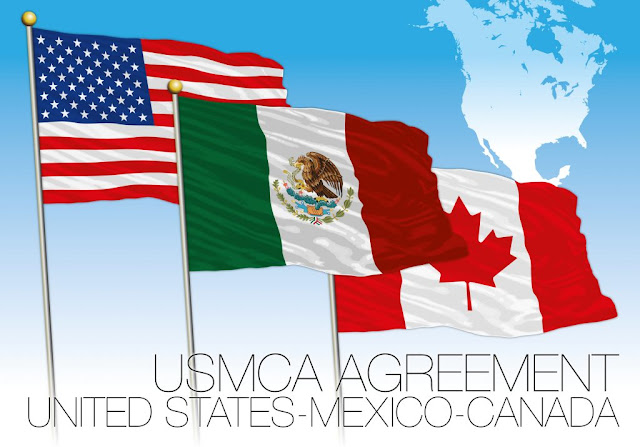 The acronym mashup of NAFTA and USMCA has walked a trade tightrope for over a year and kept the entire North American continent in suspense.

But now Congress stands at the cusp of voting on the United States-Mexico- Canada Agreement (USMCA) that modifies the North American Free Trade Agreement (NAFTA). Final negotiations between U.S. House Democrats and President Trump this week cleared potential trade and labor hurdles and USMCA could pass the finish line in early 2020.

It’s a win for bipartisan politics and trade among the U.S., Mexico and Canada. The agreement enhances the Mexican currency and economy and indirectly leads to less contentious migration from Mexico to the United States. Due to proximity, history and current trading and production relationships, Texas may have the most to gain.

The USMCA was signed by all three countries just over a year ago (Nov. 30, 2018), but continued resistance in Congress over key points held up U.S. ratification. Intense discussions surrounding intellectual property protection for pharmaceuticals, labor standards in the agreement and the ability to enforce both the labor standards and other environmental provisions remained sticking points for the Democrats.

Significant labor reforms in Mexico to accommodate the agreement were enacted by Mexican President Andres Manuel Lopez Obrador in May. These reforms to employment agreements and collective bargaining helped ensure that the terms of the USMCA would be followed in Mexico.

Trump made revising NAFTA a key part to his campaign while Democrats and even some Republicans challenged aspects of it in the interests of their political goals.

The labor reforms address the concerns of organized labor and have been called the most advanced labor provisions in any U.S. trade agreement.  The result raises the wages and domestic content requirements in automobiles in an attempt to keep automobile production in the United States.  Other provisions, such as adding electronic commerce, help bolster the claims that the USMCA modernizes the NAFTA agreement.

While the USMCA is far from perfect (both business and organized labor cite shortcomings), a functioning trade agreement in Mexico is important for the United States for many reasons.

One of the first and not well-appreciated, is that global manufacturing has been reorganized since NAFTA into global value chains. Sophisticated collaborative production processes that routinely send products and components back-and-forth across Mexican and Canadian borders are key to success.

The economic links between Mexico and the United States generally and Texas in particular, run very deep across many sectors – energy, manufacturing, agriculture and services.  Recent estimates suggest that a large share of Mexico’s exports to the United States are products assembled in Mexico from parts made in the United States.

In many cases, the value of U.S. inputs goes above 70  percent.  That means that, rather than take jobs from U.S. workers, Mexican workers are now working along with U.S. workers producing the same goods in different parts of the production process.

Vehicles are one of the most prominent examples. Parts made in Texas get shipped to Mexico for further processing and then returned to Texas as final products. Research done by the SMU Texas-Mexico Center shows that U.S. and Mexican workers are now complements rather than substitutes.

Another key reason that we need a functioning trade agreement with Mexico is that, without one, investors lose confidence in the Mexican currency.  In May 2019, the peso dropped 2.5  percent against the dollar when President Trump announced tariffs on Mexican goods.  The rising uncertainty discourages investment and makes it more difficult for the Mexican economy to grow.

Migration from Mexico has been falling since the NAFTA provisions kicked in and growth and stability resumed in Mexico (as the original proponents of NAFTA claimed would happen).  The uncertainty that would come from not having a functioning trade agreement with Mexico could reverse those trends.

There may still be concerns about the USMCA, but we have the ability to address those concerns through domestic legislation.  Finding a way to make trade adjustment assistance work for the minority of workers displaced through growing trade is the best way to secure the benefits of trade.

Now that there are agreements in principle that solve on all the major sticking points, it’s time to pass the USMCA and to celebrate this rare example of bipartisan cooperation.