Three legal scholars testify Trump should be impeached, another one says not so fast 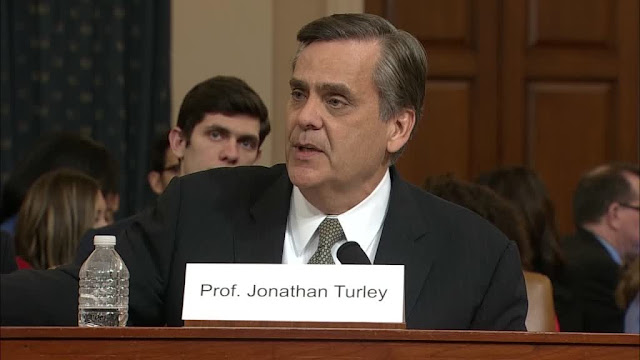 House lawmakers conducting the impeachment investigation into President Trump heard clashing testimony Wednesday from a quartet of acclaimed legal scholars who sparred for hours over the gravity of the president’s conduct regarding Ukraine — and whether it warrants his removal from office.

Three of the witnesses who appeared before the House Judiciary Committee were invited by Democrats, and all three delivered a scathing assessment of Trump’s dealings with Kyiv, arguing that his effort to press Ukrainian leaders for political favors is an abuse of power — and exactly what the nation’s Founding Fathers had in mind when empowering Congress with impeachment authority.

“The president’s serious misconduct, including bribery, soliciting a personal favor from a foreign leader in exchange for his exercise of power and obstructing justice and Congress, are worse than the misconduct of any prior president,” said Michael Gerhardt, a law professor at the University of North Carolina at Chapel Hill.

The fourth witness, who was invited by Republicans, took the opposite stance, characterizing Democrats’ impeachment push as a “slipshod” effort fueled by partisan emotions and with no basis in constitutional law.

“If the House proceeds solely on the Ukrainian allegations, this impeachment would stand out among modern impeachments as the shortest proceeding, with the thinnest evidentiary record, and the narrowest grounds ever used to impeach a president,” said Jonathan Turley, a law professor at George Washington University.

Turley, who noted he did not vote for Trump in 2016, warned that impeaching Trump prematurely would set a “dangerous precedent.”

The dispute between the two sides was essentially choreographed. The Democrats leading the impeachment investigation are unanimous in their belief that Trump abused his power for personal gain, and in Wednesday’s witnesses, they hand-picked three figures who share that view.

“The president has shown us his pattern of conduct,” said Judiciary Committee Chairman Jerrold Nadler (D-N.Y.). “If we do not act to hold him in check — now — President Trump will almost certainly try again to solicit interference in the election for his personal, political benefit.”

Republicans, meanwhile, have united behind Trump throughout the inquiry, and Turley was chosen based on his previous assessments that the president’s conduct in Ukraine did not merit impeachment.

“If presidents can be impeached for partisan policy differences based on presumptions and feelings, not actual evidence, Democrats have profoundly undermined the precedents of this institution,” said Rep. Doug Collins (Ga.), the top Republican on the Judiciary panel.

With both sides dug in, Wednesday’s hearing isn’t likely to change any minds on Capitol Hill. But with public support for removing Trump hovering around 50 percent — and with many Democrats hoping to vote on impeachment articles before Christmas — Democrats see the public Judiciary hearings as their last best chance to swing voter sentiment in their favor.

“It adds more clarification to what impeachment is and what the impeachable offenses are,” said Rep. Donna Shalala (D-Fla.).

Wednesday’s hearing was the first conducted by the Judiciary Committee on the Ukraine affair, following weeks of investigation led by House Intelligence Committee Democrats, who officially unveiled their findings just a day earlier. That 300-page report painted a damning picture of Trump leveraging U.S. military aid to Ukraine to press its leaders into announcing anti-corruption investigations targeting the president’s political rivals.

The Judiciary Committee has a different task, charged with crunching the evidence compiled by the Intelligence investigation to determine if Trump should be removed.

Judiciary Democrats directed the majority of their questions to the three friendly witnesses, who followed a predictable narrative of offering dire warnings about the long-term costs of allowing a president to remain in office with no legal boundaries. Turley, the GOP witness, countered by cautioning the majority to use restraint in seeking to remove a sitting U.S. president.

Heading into Wednesday’s hearing, there were whispers of concern from Democrats wary that the proceeding would degenerate into an unruly spectacle of partisan disruption and political grandstanding. And, as they expected, Republicans repeatedly sought to raise procedural motions to delay and protest a process they have described as a partisan effort to rewrite Trump’s election.

“This is not an impeachment, this is a simple railroad job, and today’s [hearing] is a waste of time, because this is where we are at,” Collins said.

“It didn’t start with [former special counsel Robert] Mueller, it didn’t start with a phone call. You know where this started: It started with tears in Brooklyn in November 2016 when an election was lost,” he added, referring to then-Democratic presidential nominee Hillary Clinton’s campaign.

Still, Nadler and the Democrats were largely able to maintain control of the process. With rapid speed, Democrats knocked down the GOP motions, which sought to compel House Intelligence Committee Chairman Adam Schiff (D-Calif.) to testify as an impeachment witness, subpoena the whistleblower who first brought forward allegations about Trump and Ukraine and even postpone the hearing by a week.

Republicans also launched attacks against the Democratic witnesses, particularly Stanford law professor Pamela Karlan after she made a quip about how Trump could name his youngest son Barron, but couldn’t actually make him a baron, since the president isn’t a king.

“It does not lend credibility to your argument. It makes you look mean,” Rep. Matt Gaetz (R-Fla.) said, fiercely confronting Karlan during his five minutes of questioning.

Karlan later apologized for her remarks on Barron Trump, saying “it was wrong of me to do that.”

Gaetz also sought to question the witnesses on their previous public remarks on impeachment, as well as donations some witnesses made to Democratic politicians.

Still, while the lead-up to the hearing was big, there were few surprises or breakout moments as both parties sought to win the day’s PR battle royal.

While the task of rallying the American public fell on both parties, the hearing highlights how, at the end of the day, the call of whether Trump’s actions reached the level of high crimes and misdemeanors is a political call as much as it is a legal one.