Things to watch for in Horowitz report 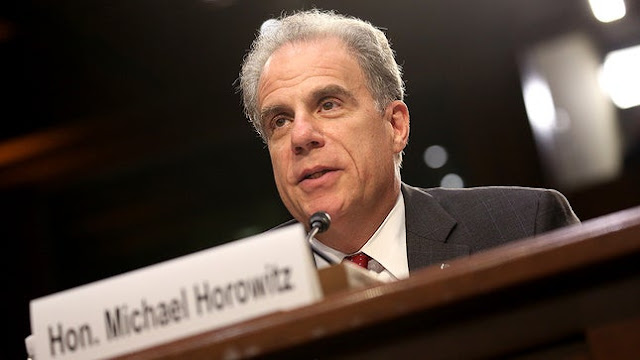 Justice Department inspector general Michael Horowitz’s long-awaited report examining the FBI’s actions in the early stages of the 2016 investigation into the Trump campaign and Russian election interference is slated to drop Monday.

President Trump and his allies have buzzed about the report for months and are hoping to be validated in their beliefs that the FBI acted improperly. But early indications suggest the report is unlikely to find that the bureau exhibited bias against the president that tainted their efforts.

Here are five things to watch for when the report is made public.

Will it vindicate or disappoint Republicans?

The report’s release will be closely watched by GOP allies of the president who are suspicious of how the FBI conducted its probe.

Republicans have alleged the FBI abused its powers in applying for a surveillance warrant to wiretap former Trump campaign adviser Carter Page, and that bureau agents were motivated by political bias against Trump. The surveillance warrant was at the center of Horowitz’s inquiry, which was launched in March 2018.

Early reports about the inspector general’s draft findings indicate that while the report will criticize the FBI, it will fall far short of confirming long-held suspicions among Trump and his supporters that he was wrongfully targeted by bureau agents for political reasons.

Horowitz is said to have uncovered evidence that an FBI lawyer altered a document linked to the Page warrant, according to the New York Times and the Washington Post. He reportedly referred the matter for potential criminal prosecution.

But reports have also indicated Horowitz did not find that any top agents on the investigation abused their powers due to political bias.

The findings are likely to further stoke partisan debate over the FBI’s Russia probe, which has continued long after the conclusion of former special counsel Robert Mueller’s investigation that did not find evidence to charge members of the Trump campaign with conspiring with Russia but found the campaign welcomed Russian meddling in 2016.

How does Trump react?

The president is likely to seize on aspects of the report more favorable to his narrative — that the FBI and the Obama administration had it out for him.

He has predicted the report's findings will be “historic” and repeatedly alleged that Obama administration officials spied on him. Trump will likely tout any revelations that bolster his case.

But if the findings are largely a bust for Trump and his allies, the president may focus his frustration on Horowitz. The inspector general’s scheduled testimony in the Senate on Wednesday could open him up to more criticism, from Trump’s allies on Capitol Hill, if the report doesn’t support the president’s narrative.

Trump has a history of lashing out publicly and privately at inspectors general whose work has led to trouble for him. Most recently he criticized Intelligence Community Inspector General Michael Atkinson’s handling of a whistleblower report focused on Trump’s July 25 call with the Ukrainian president.

Trump suggested Atkinson should not have deemed the complaint — which helped spark the impeachment inquiry — credible and that he should be asked to testify.

The release of Horowitz’s report will coincide with a House Judiciary Committee impeachment hearing, making it even more likely Trump will be weighing in on Monday.

Does Barr register any objection?

An explosive Washington Post report last week said Attorney General William Barr had disagreed with one of Horowitz’s findings, namely that the FBI possessed enough information in July 2016 to justify opening a probe into the Trump campaign.

That development raised questions about whether Barr would go public with any objections after the report is released. Barr has said little publicly about the Horowitz investigation and a Justice Department spokeswoman issued a statement last week crediting the inspector general for doing “excellent work” and discouraging speculation about the forthcoming findings.

“The Inspector General’s investigation is a credit to the Department of Justice. His excellent work has uncovered significant information that the American people will soon be able to read for themselves,” said Justice Department spokeswoman Kerri Kupec.

“Rather than speculating, people should read the report for themselves next week, watch the Inspector General’s testimony before the Senate Judiciary Committee, and draw their own conclusions about these important matters,” she added.

Barr has emerged as a key Trump ally and a popular target among Democrats, who have eviscerated him over his handling of the Mueller report. Any comments Barr makes this week on Horowitz’s report will be closely watched on Capitol Hill and at the White House.

FBI in the hot seat

The FBI will be subject to scrutiny once the report is released, placing the bureau at the center of yet another political storm.

The report comes months after Horowitz issued a stern rebuke of former FBI Director James Comey for mishandling sensitive memos after he was fired by Trump.

Republicans, including the president, have long targeted the FBI over the Russia investigation, and the bureau came under scrutiny from both parties for its handling of the investigation into former Secretary of State Hillary Clinton’s emails.

Republicans are likely to seize on any details about the FBI lawyer who allegedly altered a document related to the Page warrant; they’ve already done so after news reports emerged saying the individual was being referred for potentially criminal wrongdoing.

It’s unclear, however, how critical Horowitz will be of the bureau as a whole, and the level of scrutiny will depend on the revelations of his report. Finding that agents did not act out of political bias would shield the bureau from some criticism.

Horowitz is slated to deliver testimony before the Senate Judiciary Committee on Wednesday during which he will be grilled on his findings.

Trump and some congressional Republicans have already started laying the groundwork to portray the inspector general’s report as a precursor to the main event: the results of U.S. Attorney John Durham’s probe into the origins of the Russia probe.

“The big one that's going to come out is the Durham report,” Trump said at a NATO meeting last week. “He's one of the most respected law enforcement or U.S. attorneys anywhere in the country. He's a tough guy. He's had an incredible track record. He's actually sort of non-partisan, I guess, from what I hear.”

Durham, the U.S. attorney in Connecticut, was chosen by Barr to lead a review of how the Russia investigation began. The probe was repeatedly labeled a “hoax” and a “witch hunt” by Trump over the course of roughly two years.

The president and those close to him have hung their hopes on Durham implicating former officials in wrongdoing to validate their long-held belief that Trump was a victim of government spying.

But they may be disappointed. The Washington Post reported last week that Durham was unable to support the theory among some Trump allies that the Russia probe was set up by U.S. intelligence.