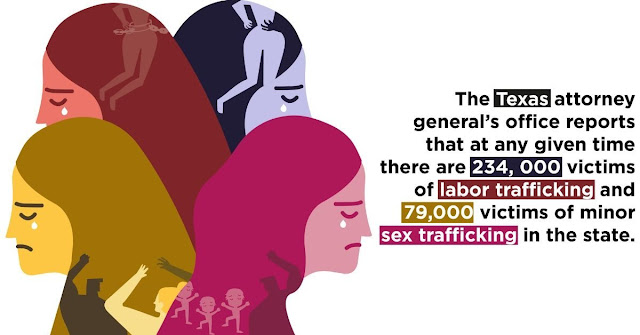 The practice of human trafficking isn’t exclusive to far-away locales in Eastern Europe, Southeast Asia, or our southern borders.

This form of slavery is prevalent in Texas, where perpetrators fill labor needs or provide the means to perform an unlawful sexual activity.

▪Texas actuated 19 criminal human trafficking cases in 2018, which was slightly down from 2017, tying New York for the number-one spot. There was a total of 171 new cases in the U.S. Texas accounted for 11 percent of that total.

▪There were 74 active criminal human trafficking cases in Texas during 2018, dubiously earning the state the top ranking in the category of active cases. Eight percent of those cases were labor-related and nearly 92 percent were sex-trafficking related.

▪A total of 45 defendants were convicted of human trafficking in 2018, awarding Texas the number-one distinction in that category.

The Texas attorney general’s office website stated that it has assisted in the successful prosecution of several human trafficking cases resulting in felony convictions that aggregated to 441 years of prison time.

The National Human Trafficking Hotline revealed that between 2007 and 2018, Texas amassed a total of 18,202 contacts — described as “phone calls, texts, online chats, emails, and webforms” — 4,788 human trafficking cases and between 7,956 (moderate indicator) to 8,505 (high indicator) victims.

The National Human Trafficking Hotline breakdown of the 1,000 cases was as follows: sex trafficking (719); labor trafficking (118); sex and labor (89); trafficking type not specified (74).

The venues or industries for sex trafficking cases consisted of

Interestingly, only 147 of the cases reported by the National Human Trafficking Hotline included foreign nationals.

“An estimated 80 percent of humans trafficked in our country are American, disputing the notion that most are immigrants,” the HCDE blog also stated.