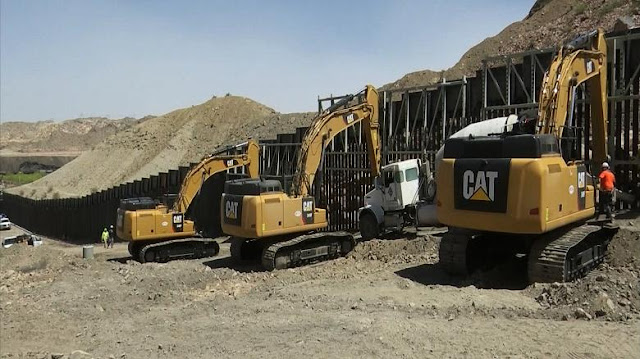 A state judge in Texas temporarily blocked construction of a private stretch of border wall on the U.S.-Mexico border, citing the project's potential for "imminent and irreparable harm" to a border butterfly sanctuary.

State District Judge Keno Vasquez of Hidalgo County issued a temporary restraining order Tuesday, ordering We Build the Wall to stop any construction on lands owned by the National Butterfly Center along the border.

We Build the Wall, the defendant in the case, is a private group that last month began construction of segments of a border wall in Texas in a show of support for President Trump's signature push to build a barrier along the U.S.-Mexico border.

The National Butterfly Center, who were the plaintiffs in the case, own the land where the We Build the Wall proposed its construction.

According to the National Butterfly Center's website, its officials found surveyor's stakes and a work team "with chainsaws and heavy equipment" on the group's land between the Rio Grande and levees near the border on July 20.

The workers hired by We Build The Wall were planning to clear more than 200,000 square feet of natural habitat on the group's private land, according to the center.

"The property and rights involved are unique and irreplaceable, so that it will be impossible to accurately measure, in monetary terms, the damages caused by the Defendants’ conduct," wrote Vasquez.

Brian Kolfage, founder of We Build the Wall, told CNN Tuesday that his group had not received a restraining order.

"More fake news. We haven't heard anything. We have not been served," said Kolfage, according to CNN.

Border wall construction is for the most part done under contract by the federal government, but We Build the Wall privately raised funds to build a segment of the wall.

Customs and Border Protection (CBP) has mostly focused on replacing aging or smaller barriers with new models, but construction has started on new segments of border wall.

Thompson wrote that Fisher Sand and Gravel had not been awarded contracts before because "its proposals repeatedly did not meet the operational requirements of U.S. Customs and Border Protection and its prototype project came in late and over budget."