Takeaways from the Democratic debate 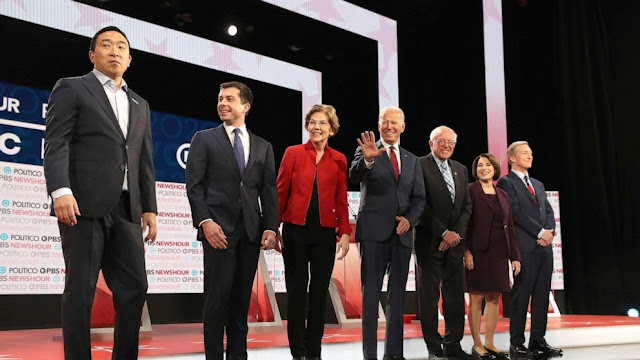 The final Democratic debate of 2019 took place in Los Angeles on Thursday, with less than two months to go before the Iowa caucuses.

What were the main takeaways?

This December debate should have felt momentous, marking the evening that the Democratic presidential primary got serious. We’re finished with the crowded ten-candidate stages; only seven candidates qualified for tonight and there’s only one more debate until Iowans start voting in the caucus.

The first hour and twenty minutes featured no real verbal punches. But then Pete Buttigieg and Elizabeth Warren went at it over Buttigieg’s fundraiser in a California “wine cave” with $900 per bottle offerings. “Billionaires in wine caves should not pick the next president of the United States,” she warned. Buttigieg pointed out that he was the only candidate on stage who wasn’t a millionaire or billionaire, and accused her of trying to impose “purity tests you yourself cannot pass” and jabbed, “Senator, your net worth is one hundred times mine.”

Then Bernie Sanders tongue-in-cheek jabbed Buttigieg for not having as many billionaire donors as Joe Biden. (Somehow, Sanders seems more energetic since his heart attack, not less.) A few minutes later, in a fight that seemed to reflect their mutual need to win Iowa, Amy Klobuchar took shots at the South Bend mayor, accusing him of not respecting the experience of the other candidates on the stage. Those were rare moments of dramatic conflict in an otherwise somnolent, repetitive, groan-inducing night.

A lot of tonight’s seven candidates — certainly the top four — all must feel reasonably confident about where they stand right now. While people have been expecting and predicting a Biden collapse all year long, he’s still the national front runner, and still leads South Carolina and Nevada by healthy margins. Sanders is close to the lead in Iowa and currently leading New Hampshire. Buttigieg leads Iowa and is second in New Hampshire. Warren suffered a real slump, but she’s still coming out of Iowa with delegates and could come back in one or more of those other big four early states.

The end result is a group of top tier candidates who feel comfortable with where they are … and maybe even a little complacent. The no-first-strike philosophy is probably a miscalculation by someone up on that stage; it’s hard to imagine a scenario where all four candidates feel terrific after New Hampshire.

Klobuchar is running to be president of Iowa; every chance she got, she cited her home state, Midwestern values, corn, farm bills, or the Wind Cave in South Dakota. No candidate wants to waste time getting pulled into a fight with Tom Steyer, and most of these candidates will probably ask him for a donation somewhere down the road. Andrew Yang isn’t up on that stage to throw metaphorical punches; he’s there to promote his quirky technocrat agenda.

The debates so far have indulged the candidates on their worst habits. Elizabeth Warren assured us she would close the prison for terrorists in Guantanamo Bay, contending she would achieve what Barack Obama could not do in two terms after a 2008 landslide with 60 Democratic votes in the Senate. Asked about China, Steyer offered a contradictory, meandering word salad declaring that the United States shouldn’t be the world’s policeman, but we should be working with all like-minded allies who share our values, and oh, by the way, we probably have to reach a deal with China on climate change anyway.  Sanders had already had been asked question on climate change, declaring that we have to save the planet, and wanted to go back to that issue to once again use his “this is an existential threat” talking point. One of the night’s better moments was PBS anchor Amna Nawaz telling Sanders to answer the question he was asked.

All of the candidates have developed a lot of verbal placeholders that they use to start, finish, and sometimes fill out answers. “The stakes could not be higher.” “We can’t wait any longer.” “We need to do more to help the people who need it most.” Just as the Buttigieg and Warren dispute got rolling, Klobuchar stepped into the role traditionally played by Cory Booker and lamented that Democrats fighting among themselves – also known as having a debate – is just what the Republicans want to see.

Biden offered one answer that could come back to haunt him in a general election. Our old friend Tim Alberta asked, “Would you be willing to possibly sacrifice the jobs of hundreds of thousands of blue-collar workers in that transition to that greener economy?” Biden answered, “the answer is yes.”

A lot of other people seemed to think Klobuchar had a good night, but any night that you don’t think someone else emerged  head and shoulders ahead of everyone else, it’s a good night for the front runner. Biden was a little crisper and more focused than usual, anyway. A debate where no one wants to take shots at him is another night where he’s getting one step closer to becoming the nominee.