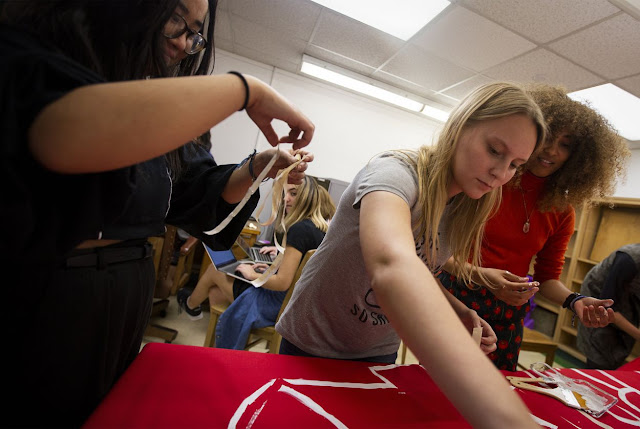 By Shannon Najmabadi and Tiana Woodard

With the end of the fall semester looming, University of Texas at Austin administrators continue to face a burgeoning student protest movement over the return to the classroom of two professors punished for sexual misconduct policy violations.

In the last few months, students have stormed a class, staged sit-ins outside administrators’ offices, circulated a petition and issued a list of demands including public notices naming all professors found to have committed misconduct.

“We don't know who we're in a classroom with,” said one protest organizer, senior Alyssa Ashcraft. “That's the concerning part to students.”

Another sit-in is planned for Friday. Two days ago, UT President Greg Fenves and Executive Vice President and Provost Maurie McInnis agreed to attend a public forum with students next semester, and administrators have met with student organizers several times since the sit-ins began.

Sarkar was suspended for a semester in 2017 after students complained he asked them to pose for nude photos, swim with him at a nude beach and led uncomfortable conversations that were “sexual in nature,” according to UT documents.

Hutchison made “inappropriate remarks” to graduate students, and entered into a consensual relationship with one, according to media reports and a summary of a UT investigation. He was banned from supervising graduate students on his own for two years and his undergraduate courses were later canceled for one semester. Hutchison returned to the classroom this fall; Sarkar returned in the fall of 2017.

Neither Hutchison nor Sarkar responded to a request for comment. Sarkar has disputed the allegations against him in UT documents, and said he complied when an administrator suggested changes in his conduct.

But UT students said it was an unpleasant surprise to learn of the professors’ misconduct history from friends or through social media.

Amanda Brown, a third-year student who took one of Sarkar’s classes this semester, said she learned of his policy violation on Twitter. “You never think that’s going to happen to you,” she said.

A fifth-year student, Candace Kosted, also heard of Sarkar’s case on Twitter and said the information prompted her to drop a research project she had been working on with him.

Though a teaching assistant has been offering a separate session for students enrolled in Sarkar’s course, Kosted said it feels like the university is “accommodating him more than anything by allowing him to keep this job.”

“School is supposed to be about learning; you’re encouraged to go to office hours. You’re encouraged to build relationships with professors,” said one protest organizer, sophomore Tasnim Islam. The university has refused to take quick steps to increase transparency, she said, and did not take the group’s demands seriously until they got press attention.

UT has hired a law firm to review its policies and swiftly formed a campus working group with students and employees. But protesters say bringing in outside experts is “a step nowhere” that “does nothing to address the immediate concerns that students have.”

Some students would like to see the professors fired or barred from teaching. Others seek less punitive measures, like having staff and faculty undergo more training about sexual misconduct, and requiring the university to publicize information about instructors’ misconduct histories and explain why some are deemed eligible to continue teaching.

A university spokesperson, Shilpa Bakre, said in a statement that UT has and “will move to terminate faculty and staff members whose violations constitute a safety threat or who engage in violations that warrant termination. The university does so in compliance with our policies, which ensure faculty and staff members receive the required level of due process under federal and state constitutional requirements.”

Not all violations rise to a level that would justify termination, she said. “The type of sanction imposed in a specific situation depends on the facts available at the time, but the intent is for the severity of sanctions imposed to match the severity of the misconduct.”

Employees who have violated school policies in the past are observed and "ongoing safety assessments are regularly administered," Bakre said. "Should new allegations of any kind surface, once reported, new investigations will be launched."

The sit-ins come as universities across the country face continuous scrutiny over how they adjudicate sexual misconduct cases and balance due process rights with protecting student victims. Debates similar to the one playing out at UT have occurred at numerous colleges, testing what offenses should follow instructors throughout their professional careers.

Peter Lake, the director of the Center for Excellence in Higher Education Law and Policy at Stetson University, said there’s been a “crescendo” of institutions facing these quandaries since around 2017, as #MeToo stories made headlines.

“This is territory that is still very contested,” said Lake, of whether instructors can “pay the penalty” for certain misconduct offenses and return to campus. “Institutions are caught in the middle of this, trying to balance what to do. There are no clear national standards on this; no obvious objective metric; no standard everyone agrees on.”

While he understands students’ desire to know “if there is a danger lurking and they are unaware,” Lake likened a list of faculty with misconduct histories to a sex offender registry on campus — one that could lead to defamation claims or expand to include other misdeeds, from DUIs to battery, assault and weapons offenses.

UT student protesters said information and rumors about their teachers already spread through whisper networks, and that the school could offer accurate facts and context about why certain professors are allowed in the classroom.

A summary of UT’s investigations shows 11 employees were found to have violated sexual misconduct-related policies between 2013 and mid-2017, including Sarkar, the lone professor on the list. Of the remaining employees, four were terminated, three were not rehired and one resigned. A more current catalogue, spanning mid-2017 to the present, is expected to be released by UT within two weeks to people who submit public information requests.

Bakre, the university spokesperson, said the working group and the external law firm would look into students’ request that policy violators’ names be proactively published, rather than released through the open records process.

UT officials have also committed to posting misconduct statistics more frequently, going beyond the mandates of a new state law that requires universities to publish the information annually.

"UT takes all allegations of misconduct and assessing potential threats to student safety extremely seriously. Our processes surrounding misconduct are thorough, fair, and of the utmost importance to our mission," Bakre said. "We will continue partnering closely with student leadership and other campus stakeholders to find solutions to these issues."