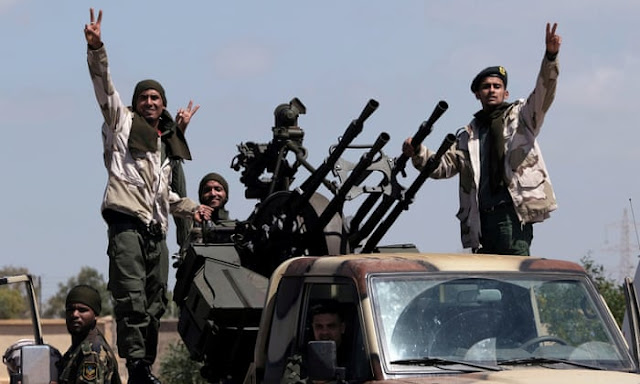 The State Department on Saturday expressed concern about the escalation of a conflict in Libya amid the reported presence of Russian mercenaries.

State Department spokeswoman Morgan Ortagus said in a statement Saturday that the U.S. is "concerned" by a request for military support by the Government of National Accord (GNA). The U.S. is also concerned about the Libyan National Army's (LNA) "threat to use foreign-supplied air assets and mercenaries."

"External military intervention threatens prospects for resolving the conflict. We deplore attacks on innocent civilians and call on all sides to refrain from escalation," Ortagus said.

For several years, Libya has been divided into the internationally recognized GNA and the LNA, according to Reuters.

Forces led by the LNA's Khalifa Haftar have been supported by Egypt, the United Arab Emirates and Russian mercenaries, according to the wire service, which cited diplomats and Tripoli officials.

A U.S. official told Reuters that the presence of the Russian forces is "creating a bloodier conflict."

"More civilian damage, damage to infrastructure like the airports..hospitals have been targeted. But at the same time we don’t see that Haftar is gaining ground," the person reportedly said.