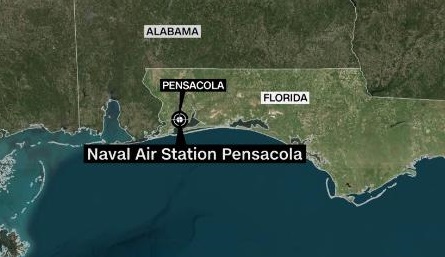 The suspect in Friday's deadly shooting at a naval air station in Pensacola, Fla., was a Saudi national and member of that country's air force, Florida Gov. Ron DeSantis (R) said during a news conference.

"There’s obviously going to be a lot of questions about this individual being a foreign national, being a part of the Saudi Air Force and then to be here training on our soil and to do this," he said.

Three people were killed and several others injured after the gunman opened fire at Naval Air Station Pensacola. The suspect was killed by law enforcement responding to the base early Friday.

DeSantis said he spoke with President Trump about the shooting and emphasized that Riyadh would eventually need to respond.

"Obviously, the government of Saudi Arabia needs to make things better for these victims. I think they’re going to owe a debt here given that this was one of their individuals,” he said.

Trump later tweeted that he spoke with King Salman of Saudi Arabia, who he said relayed that "the Saudi people are greatly angered by the barbaric actions of the shooter" and "this person in no way shape or form represents the feelings of the Saudi people who love the American people."

"My thoughts and prayers are with the victims and their families during this difficult time," the president wrote in an earlier tweet.

Officials said that the suspect was an aviation student, and officials are investigating whether the incident was terrorism-related, The Associated Press reported. The base's commander said the gunman was in aviation training but he declined to say how for along they were in the training.

The FBI declined to say whether the shooting was being investigated as terror-related, with a spokesperson saying on Friday afternoon that the investigation "is still in the preliminary stages."

Military personnel from around the world attend the Naval Air Station Pensacola.

The base has more than 16,000 military and 7,400 civilian employees, according to its website, and its commanding officer Capt. Timothy Kinsella Jr. said there are about "a couple hundred” international students there.

“We have an international training syllabus. We have students from several different countries that come here. They learn aviation, they become naval aviators while they’re here. It’s something we’ve been doing for quite a while just with our partner nations," he said.

Local authorities said they first heard reports of the shooting before 7 a.m. on Friday, with Kinsella saying that weapons are not allowed on the base unless in a security capacity.

Navy spokeswoman Lt. Cmdr. Megan Isaac said in an email that those personnel injured during the shooting had been taken to local hospitals.

Rep. Matt Gaetz (R-Fla.), who represents Pensacola, posted a video to Twitter in which he said that Friday's incident demonstrates a "serious failure in the vetting process" for those allowed to train at the base, adding that the person's "motives and engagements" were being investigated.

Friday's shooting comes two days after two civilian workers were killed at the Pearl Harbor Naval Shipyard when a 22-year-old sailor open fire before shooting and killing himself. A military official told The Associated Press that the Navy sailor in the Pearl Harbor incident was unhappy with his commanders.

"Our entire Navy and Marine Corps team is struck and deeply saddened by the attacks within our own naval family over the past several days, at Little Creek, Virginia, last week, Pearl Harbor, Hawaii, on Wednesday, and today in Pensacola, Florida," acting Navy Secretary Thomas Modly said in a statement Friday.

"These acts are crimes against all of us. Our prayers are with the families of the fallen and with the wounded. It is our solemn duty to find the causes of such tragic loss and ceaselessly work together to prevent them. Let us make concerted efforts to care for the families of those lost, and those wounded, visibly and not," he added.