Saying the same thing over and over is not major news 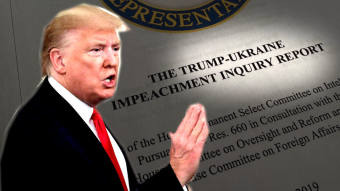 If you were looking to network newscasts for updates on impeachment in the middle of last week, you didn’t get much. While that raised some eyebrows among media critics, bad journalism was not to blame.

Instead, this was a potential warning sign for Democrats and Republicans as the process moves into its next, crucial phase: If impeachment is about engaging the public and building a case for or against, no one is doing a good job.

The formal release of two articles of impeachment was not the top story on network news last Tuesday — it came in second, right after the breaking story of a kosher market shootout in Jersey City, N.J.

By Wednesday night, the House Judiciary Committee’s debate on those articles was the fourth story on each newscast. The event wasn’t even mentioned in any of the newscasts’ show opens, which tease the top stories coming up in the program.

Even Fox and MSNBC merely dipped in and out of live House Judiciary Committee coverage Wednesday. Only CNN went “wall-to-wall,” sticking with the committee from beginning to end.

The spotty coverage wasn’t a dereliction of duty by journalists but an indication that the impeachment proceedings had stopped offering a necessary ingredient: news.

Wednesday saw members of the Judiciary Committee once again stick with all-too-familiar scripts in their allotted five minutes each of “debate” time. The day presented much of the same arguments, in much the same words, as was heard on Monday of last week, when majority and minority counsels for the House Intelligence Committee presented summations of their cases to the Judiciary Committee. Those summations, in turn, repeated testimony heard over several days by the Intelligence Committee.

That’s the challenge facing Congress from here on out. The final scene of the impeachment drama is a foregone conclusion: No one expects a conviction in the Senate. The battle now is really for the hearts and minds of voters, an attempt to move impeachment polls off of where they have stood from nearly the start: about 50 percent in favor, 42 percent opposed.

Drilling holes in the impeachment case helps the GOP next November, and a strong case helps Democrats. But that fight to shift public opinion away from the current stasis requires a stream of new arguments, information and details. Someone needs to make some real news.

That’s what happened in the Clinton impeachment process, and not in ways anyone expected.

That impeachment action took place during a midterm election, in the fall of 1998. Public opinion was already leaning against impeachment, a reality driven home when the majority House Republicans lost five seats on Election Day. House Speaker Newt Gingrich (R-Ga.) stepped down; Rep. Robert Livingston (R-La.), his designated replacement, was forced out a month later after public revelations of extramarital affairs. It was a head-spinning few weeks that exposed cracks in the Republicans’ case, and fears in their caucus.

It was breathtakingly big news, and shifted the public’s perception of impeachment: One day after the House voted to impeach, Clinton’s job approval rating hit 77 percent.

News executives’ demotion of the Judiciary Committee hearings’ profile last week was an indication that many suspect nothing will happen to change minds or the outcome this time around. Impeachment may actually become an almost tedious process for much of the rank-and-file public, stumbling toward a predictable stalemate between two entrenched sectors of both the electorate and the legislative branch.

It’s an unusual thing to think about: an impeachment proceeding, including a Senate trial, that may not produce “news,” at least not in the broad definition of news as something unexpected, unusual or unplanned. It would be the disheartening culmination of an era when divisions hardened and persuasion became a lost art.

And, yes, that realization would probably top every newscast.