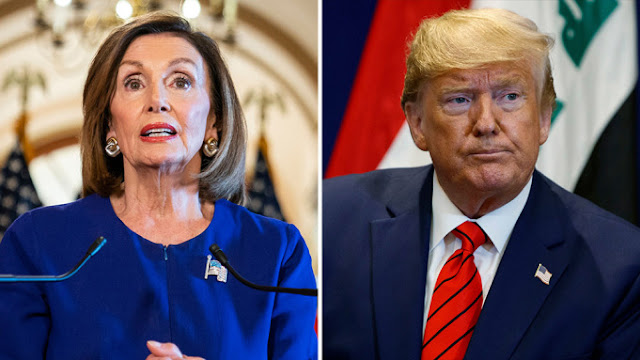 President Trump’s allies in the House and Senate blasted Speaker Nancy Pelosi (D-Calif.) Sunday morning for delaying sending the House’s articles of impeachment to the Senate for trial.

Sen. Roy Blunt (R-Mo.) said on CNN’s “State of the Union” that “frankly, I don't think the speaker has the right to do this."

"I think it's a mistake on the Speaker's part. I think this will look pretty political," he added.

Sen. Ron Johnson (R-Wis.) called the delay “bizarre," contrasting it with what he called a “rush” to hold the vote last Wednesday.

“I just think it’s kind of bizarre they had to rush to this impeachment vote, and then all of a sudden she’s sitting on it,” Johnson said on ABC's "This Week." “I don’t think the Senate should be making the case the House should have made in their presentation. My guess is they weren’t able to make the case.”

The impeachment process is on pause after the House voted last week to approve two articles of impeachment charging Trump with abuse of power and obstruction of Congress.

Pelosi has delayed sending the articles to the Senate for trial in an attempt to maintain leverage for Democrats in the upper chamber as they hammer out procedures for the Senate trial. The move has drawn praise from Pelosi's caucus even as Senate Democrats appear eager to receive the articles. Senate Majority Leader Mitch McConnell (R-Ky.) has shrugged off the tactic, saying he's "not anxious to have the trial," while Trump said he is eager to be acquitted by the Senate.

Democrats hope to use the tactic to convince the Senate to call several administration witnesses.

“I can’t imagine any senator doing this to the presidency. I hope senators will not vote to compel witnesses before the court determines whether or not there’s executive privilege,” he added.

Sen. Chris Van Hollen (D-Md.) said on Sunday that Pelosi was doing “exactly the right thing,” telling CBS’ “Face the Nation” the speaker “is focusing a spotlight on the need to have a fair trial in the United States Senate."

"And it's especially necessary when you have Mitch McConnell, Sen. McConnell, who you quoted earlier, saying publicly that he is not going to be an impartial juror, even though that's what the oath will require, that he's going to work in lockstep with the president, who is the defendant in this case, and that he’s already said no to calling fact witnesses that have direct knowledge of what's at stake in this impeachment," he added.

Sen. Dick Durbin (D-Ill.) warned against senators from both parties announcing how they intended to vote ahead of the trial.

"How can they hold their hands up and say I swear impartial justice...they should not have done that," Durbin told CNN’s Dana Bash.

"As far as I'm concerned they can tell which way they're leaning or how they feel in terms of the probability but when it comes to saying, 'I've made up my mind, it's all over,' for goodness sakes that’s not what the Constitution envisioned,” he added.