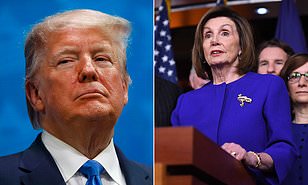 GOP senators expressed irritation over not being looped into the final-stage negotiation, which resulted in the White House making major concessions and ultimately won the endorsement of the AFL-CIO, one of the nation’s leading labor unions.

“He was negotiating with Speaker Pelosi and not so much with us,” said Sen. John Cornyn (R-Texas), an influential member of the Finance panel, referring to Lighthizer.

“He just assumed that whatever he could get Pelosi to agree to that would be it and in the process bypassed the practice since 1974 of sending up a discussion draft and having a mock mark-up where we can have an impact on the implementation,” Cornyn said. “They denied us the opportunity.”

Cornyn said “there’s a lot of good in the deal” and predicted he would support it. But he said he didn’t like how the Senate was cut out of the process.

“I don’t like the fact that a hundred senators on a bipartisan basis are denied the opportunity to participate in the negotiations as opposed to just, ‘take it or leave it,’” he said.

“I would not call this a perfect product,” Cornyn added. “I’m not happy with the way this was handled and I don’t want this to be a precedent for future trade agreements.”

Lighthizer, who spearheaded the negotiations with Canada, Mexico and Democrats in Congress, briefed GOP lawmakers on the Finance Committee on Thursday morning and the entire Senate GOP conference over lunch.

The U.S. trade representative was asked during the lunch meeting why the Trump administration didn’t put forward the new trade deal known as the United States-Mexico-Canada Agreement (USMCA) when Republicans still controlled the House in 2018, as a group of Senate Republicans pushed for late last year. Not doing so required Trump to agree to a slew of concessions in recent weeks to push it over the finish line.

“There are a lot of us that are not real pleased with some of the provisions in there,” said Sen. Ron Johnson (R-Wis.), who aired his concerns during the meeting. “Truthfully, why didn’t we move to ratify this when we had Speaker Ryan” in control of the House, he asked.

“I still just scratch my head at that, I don’t get it,” Johnson said.

Johnson said the question was raised to Lighthizer but senators didn’t receive a satisfying response.

There were procedural hurdles to swiftly approving new NAFTA, as it’s known, during the 2018 lame-duck session because the law requires Congress to wait 30 days after the administration submits the text of a trade deal before voting on it under the rules set by Trade Promotion Authority (TPA).

Lighthizer told senators “it wasn’t ready yet” when pressed about moving the trade deal in late 2018 under unified Republican control of Congress, according to a senator familiar with the back-and-forth.

Sen. Pat Toomey (R-Pa.) stood up in the Senate Republican lunch Thursday to speak at length about his concerns with the deal, which he fears will stifle free trade and lead to only modest job growth over the next few years, according to senators who attended the meeting.

Toomey has highlighted the dismantling of the investor-state dispute settlement program, which allows investors to sue governments over environmental, health and other regulations they believe are discriminatory.

He has also voiced concern over the fact the trade deal has an expiration date and that it provides little intellectual property protection for biologic medicines that are made from the components of living cells, such as protein and DNA.

Sen. Ted Cruz (R-Texas) also delivered a pointed critique of the deal, expressing concern for a provision beneficial to the tech giants such as Alphabet Inc., the parent company of Google, that Sen. Ron Wyden (D-Ore.), was able to get included in the deal, according to senators familiar with the meetings.

“I haven’t seen the text of the deal, but I hope it’s a good deal that protects our workers and creates more jobs for Texans,” Cruz said in a statement to The Hill. “I’m disappointed to learn that Section 230 language is still in the trade deal – especially when lawmakers across the political spectrum express series concerns. I’ve long said that enshrining Section 230’s grant of immunity to Big Tech in our trade agreements would be a mistake and I will continue to examine ways to hold Big Tech accountable – both legislatively and in our trade deals.”

Wyden was able to add language extending the protections of U.S. law that classify big tech firms such as Google, Facebook and Twitter as neutral platforms that can’t be sued over content.

Conservatives, however, believe the liability protection goes too far and allows them to discriminate against conservative social media content.

“I do share his concern,” Cornyn said of Cruz’s push back.

“The Communications Decency Act said they would be treated as a neutral platform and weren’t responsible for content,” he said, noting there are exceptions for child pornography, exploitation and terrorist-related activity.

“These have become de facto monopolies and they are using that monopoly power to basically to manipulate the news and information in a way that is dangerous,” Cornyn said, echoing the complaints of conservatives who charge that Facebook and Google are censoring right-leaning content.

Sen. Josh Hawley (R-Mo.), emerging from the meeting, said he too shares Cruz’s qualms about adding language to the trade deal that extends protections for tech companies against litigation under section 230 of the Communications Decency Act.

Hawley in June introduced legislation to amend section 230 of the law to remove what he called “immunity for Big Tech companies.”

A Senate Democratic aide noted that Section 230 of the Communications Decency Act applies to all social media platforms, not just big tech companies.
“I don’t love anything in there,” Hawley said of the trade deal. “I don’t love 230, for instance, 230 CDA, being in there.”

“We didn’t get to negotiate the agreement and the ability to change it now is quite limited,” Hawley added, but predicted he would ultimately vote for it.

“I think overall it’s a major improvement over NAFTA. It’s certainly very good for my state, for farmers and for workers who labor in the state, so I anticipate supporting it,” he said.