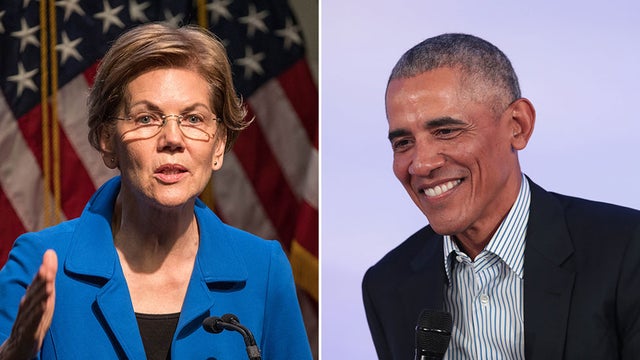 Sen. Elizabeth Warren has spent her campaign railing against the donor class, making it known she doesn't want their help.

She has publicly bashed millionaires, has sworn off high dollar fundraisers and has refused large checks from Democratic bundlers.

But behind the scenes in recent months, former President Obama has gone to bat for Warren when speaking to donors reluctant to support her given her knocks on Wall Street and the wealthy.

And if Warren becomes the nominee, Obama has said they must throw the entirety of their support behind her.

The former president has stopped short of an endorsement of Warren in these conversations and has emphasized that he is not endorsing in the Democratic race.

But he also has vouched for her credentials, making it clear in these private sessions that he deems her a capable candidate and potential president, sources say.

“He’s asked all of the candidates who have sought his advice three questions: Is your family behind you? Why you? And why now? She checked the box for all,” said one longtime Obama ally.

“I think he feels licensed to give an opinion on her because he’s ‘hired' her,” the longtime Obama ally said.

While former Vice President Biden is the best-known Obama figure running for president, he’s not the only one in the race to have worked for the administration.

Julián Castro was the secretary for Housing and Urban Development under Obama, and Warren in 2010 became an assistant to the president and special adviser to the secretary of the Treasury, where she helped set up the Consumer Financial Protection Bureau.

“He obviously thinks she’s very smart,” one Democratic donor added. “He thinks her policy ideas matter. And I think he sees her running the campaign with the most depth.”

"Look, we have a field that is very accomplished, very serious and passionate and smart people who have a history of public service and whoever emerges from the primary process, I will work my tail off to make sure that they are the next president," the former president said in a question and answer session at a Democracy Alliance event in Washington.

Obama's praise of Warren is a contrast of sorts from his days at the White House, when the two were said to have disagreements on economic issues including the Trans-Pacific Partnership. The tension between the president and Massachusetts senator frequently became fodder around the administration.

Since then, the friction has continued to make headlines, including the time in 2015 when Obama was dismissive of Warren's opposition to the TPP deal.

“The truth of the matter is that Elizabeth is, you know, a politician like everybody else,” he said in an interview with Yahoo.

On 2017, Warren took a shot at her former boss, saying she was “troubled” to hear of Obama's six-figure speaking deals as a former president.

Now, as she runs for president herself, Warren has distanced herself from some Obama policies, but has also spoken glowingly about the time in 2002 when she met Obama — who remains enormously popular among Democratic voters.

Earlier this week, more than 200 lower and mid-level Obama staffers who worked on his presidential campaigns and in his administration threw their support behind Warren.

The endorsements came at a pivotal time for the campaign with less than 70 days left until the Iowa caucuses and as candidates like Biden and South Bend, Ind., Mayor Pete Buttigieg seek to win over the Obama coalition.

To date, Warren has been unable to secure more senior-level Obama veterans. That support from the highest levels — including former Secretary of State John Kerry and former Treasury Secretary Jack Lew— has gone to Biden.

Obama remains “incredibly fond” of Biden and is watching his campaign with interest, said one Obama ally who has spoken to the former president. But Obama — who is currently in Hawaii for his annual Christmas vacation — has intentionally sought to remove himself from the 2020 race. He has said he would not endorse anyone during the primary, including Biden, and is not expected to be out on the campaign trail until there is a nominee.

At the same time, those around him say he worries that Democrats in financial services “will have an issue her,” as one ally put it, if she wins the nomination and is trying to “rally the troops” preemptively.

During the Democratic debate on Thursday night, Warren singled out Buttigieg for hobnobbing with big donors at “wine cave” fundraisers to help boost his campaign.

“The mayor just recently had a fundraiser that was held in a wine cave full of crystals and served $900 a bottle wine,” Warren said.

Buttigieg, ready for the attack, accused Warren of being a millionaire herself, and said she had accepted donations from wealthy donors during her Senate campaign. He also said the Democratic presidential nominee must accept money from all donors for the general election fight against President Trump.

Warren and Buttigieg are in a battle for Iowa, which is a key contest for both in the path to the White House. While Biden and Sen. Bernie Sanders (I-Vt.) are also in the mix in the Hawkeye state, a victory there is not seen as pivotal for either candidate.

It’s been a topsy turvy run for the Massachusetts senator. While she saw an upward trajectory throughout much of the fall, she has fallen in recent polls, trailing behind Biden and Sanders.

An Emerson College Poll out this week showed Biden receiving 32 percent of support among Democrats while Sanders received 25 percent and Warren pulled 12 percent, falling eight points since the last survey in November.

Obama hasn’t publicly singled out any of the candidates but occasionally, behind closed doors, he’ll offer assessments when he is asked. Those who know him well say that while he is stylistically and temperamentally different from Warren, “he appreciates her intellect and is impressed by the campaign she’s run.”

“If anything, she has the most substantive achievements from his time in the White House,” one former Obama aide said. “And he’s someone who can talk at length about her accolades.”

While Obama has remained quiet in recent months, during a private event in Singapore this week, the former president said that women are “indisputably better” than men.

“I’m absolutely confident that for two years if every nation on earth was run by women, you would see a significant improvement across the board on just about everything…living standards and outcomes,” Obama said according to the BBC.

Later, after he was asked if he would go back into politics, he said he believed in making room for new leadership.

Asked about the comment at the debate, Biden said that Obama wasn’t talking about him.