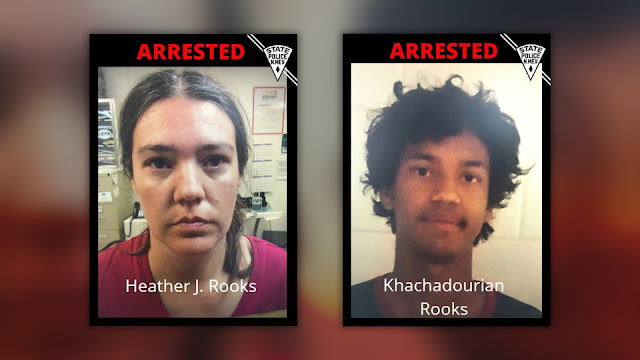 On December 1, 2019 the New Mexico State Police Investigations Bureau responded to Interstate 40 around mile post 114 in Cibola County, near the Town of Laguna for an unresponsive twelve-year-old female child, who’s condition was believed to be the result of child abuse.

State Police Investigations Bureau agents learned that Heather J. Rooks (39) of Pahrump, Nevada was traveling through New Mexico to Nevada with her seventeen-year-old-son Khachadourian Rooks and her twelve-year-old-daughter, in a van driven by Heather’s father.  Heather and her father were in the front seats while Khachadourian and the daughter were in the rear seats of the van.

According to Heather and her son, the daughter “threw a tantrum” during the trip. Khachadourian sat on the girls face and throat to restrain her for up to forty-five minutes until she was not moving.  The grandfather then pulled the van over and began CPR on the girl.   Emergency Medical Services was called, and the girl was airlifted to an Albuquerque hospital.

Heather J. Rooks and Khachadourian Rooks were both arrested and charged with Abuse of a Child Resulting in Great Bodily Harm on December 1, 2019.  They were booked into the Cibola County Adult and Juvenile Detention Centers on no bond holds.

On December 4, 2019 at around 1:00 p.m.  the child died from her injuries, and as a result Heather and Khachadourian could be facing additional charges.

This case is still under active investigation by the New Mexico State Police Investigations Bureau.  The identity of the victim will not be released at this time.  The grandfather who has not been charged will not be identified.  At the conclusion of this investigation it will be turned over to the appropriate district attorney for prosecution.