Kansas police officer made up story about expletive on coffee up 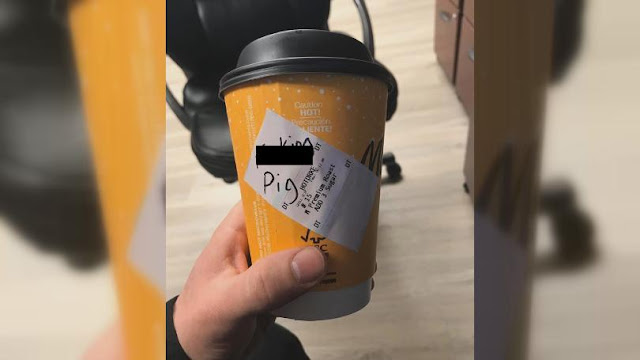 A police officer made up a story about having "f---ing pig" written on his coffee cup at a McDonald's in Junction City, Kansas, as a joke, his chief said Monday.

The admission comes after the chief wrote in a now-deleted Facebook post that the incident was a "black eye" on the city on Sunday, which forced the store's manager to issue a denial saying that video surveillance footage showed the incident did not occur in the store.

Herington Police Chief Brian Hornaday said at a press conference Monday that the issue had turned into a "black eye" on his department, according to Kansas.com.

“This is now, absolutely, a black eye on law enforcement,” he said.

The officer who made the false claim, he added, had been fired.

Dana Cook, the owner of the McDonald's restaurant in question, said earlier in the day that surveillance footage cleared the store's employees of any involvement.

“My McDonald’s have the utmost respect for all members of law enforcement and the military and were troubled by the accusation made. We thoroughly reviewed our security video from every angle, which clearly shows the words were not written by one of our employees. We look forward to working with Chief Hornaday as he continues his investigation," said Cook on Monday.