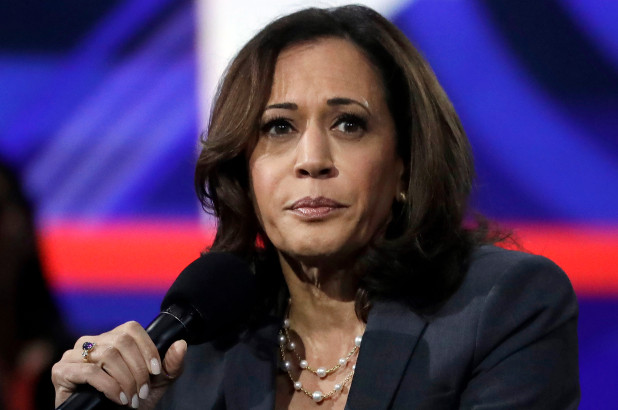 Sen. Kamala Harris (D-Calif.) suspended her bid for the Democratic presidential nomination on Tuesday, the nadir of a months-long slump for a once-rising star who was never able to turn her political talents into a sustained movement.

Harris entered the race as a front-running candidate, gifted with a compelling backstory, a commanding stage presence and a donor base in the largest and wealthiest state in the nation, launching her campaign with a show-of-force rally that drew tens of thousands to her hometown of Oakland. But eleven months later, Harris told supporters that she was no longer financially capable of running a strong campaign.

“I’ve taken stock and looked at this from every angle, and over the last few days have come to one of the hardest decisions of my life. My campaign for president simply doesn’t have the financial resources we need to continue,” Harris wrote. “I’m not a billionaire. I can’t fund my own campaign. And as the campaign has gone on, it’s become harder and harder to raise the money we need to compete.”

“In good faith, I can’t tell you, my supporters and volunteers, that I have a path forward if I don’t believe I do,” she wrote.

At times over the course of her eleven months in the race, Harris seemed to have the greatest potential to replicate then-Sen. Barack Obama’s rise from state office to the Senate and the White House. She hoped to reassemble Obama’s coalition of younger and African American voters, and she demonstrated an ability to command a debate stage like few others among her peers.

She built a formidable campaign, relying on a brain trust that combined a stable of veteran California strategists who have guided her entire career and her sister Maya, a longtime Democratic policy expert. Harris won key endorsements among activists in Iowa and hired an army of field organizers among the largest in the critical first-in-the-nation caucus state.

“She assembled a really good team. She had some really smart, talented people on her team,” said Doug Thornell, a Democratic strategist who is unaligned in the presidential contest. “She had a really good launch, which set a high bar.”

But Harris struggled to convert the early enthusiasm into steady support. As other candidates staked out ideological lanes and cultivated voters with plans to address critical issues to Democratic primary voters, Harris seemed undefined, cycling through campaign themes and strategies.

As other candidates chose sides on how dramatically to overhaul the nation’s health care system, Harris tried to straddle warring camps. Once a supporter of Sen. Bernie Sanders’s (I-Vt.) Medicaid for All bill, she dropped her cosponsorship. On the debate stage, she could not concisely articulate her views on what was becoming a key dividing line within the Democratic Party.

Harris never found a way to capitalize on her two best assets — her home state, the largest single delegation to the 2020 Democratic National Convention, and her career as a tough prosecutor that fueled her fiery stage presence.

On the debate stage, Rep. Tulsi Gabbard (D-Hawaii) sharply criticized Harris’s record as California’s attorney general, accusing her of locking up minorities and low-level drug offenders. And in California she led just one poll, in July.

As Harris debated how to position herself, other candidates filled in gaps around her. Former Vice President Joe Biden positioned himself as the most likely to beat President Trump. Sen. Elizabeth Warren (D-Mass.) became the progressive champion with the policy plans to match. South Bend Mayor Pete Buttigieg used an early break-out moment to set himself up as the moderate alternative.

Harris tried, and failed, to keep a toe in all three lanes.

“She wasn’t able to craft a clear identity for her campaign,” Thornell said. “They were sliding from one rationale to the next, and what hovered over a lot of this in the beginning was, it seemed she was unable to figure out how to use her prosecutor background to her advantage.”

Her campaign, too, struggled to capture a moment in a meaningful way. Harris’s biggest breakout moment came in the first Democratic debate, when she confronted Biden. Her campaign buzzed with a short-term fundraising and polling boost, but failed to convert into sustained support.

Harris’s poll numbers jumped after that debate to their highest point, but she slid almost continuously afterward. She dropped below 10 percent in both national and Iowa polls in August and never recovered.

In recent weeks, as fundraising slowed, Harris pledged a renewed focus on Iowa, laying off campaign staff in other early states.

Harris ended her campaign two weeks before the next Democratic debate, scheduled for December 19 in Los Angeles. She had already qualified for the debate stage, and a super PAC supporting her had begun purchasing airtime on Iowa television stations.

The super PAC began cancelling those reservations on Tuesday.

Rivals and supporters praised Harris after she announced her departure.

“She is a first-rate intellect, first-rate candidate and a real competitor,” Biden said as he left a campaign event in Mason City, Iowa. “I have mixed emotions about it because she is a solid person and loaded with talent.”

Harris’s exit from the race does not guarantee the end of her national presence. She is likely to be seriously considered as a potential vice presidential running mate, and her support will be coveted ahead of California’s Super Tuesday primary contest.

“Californians can be proud of Sen. Harris,” said Bob Mulholland, a Democratic National Committee member from California who supported her nomination. “There’s not enough length even on the L.A. freeway for these candidates, so she had a tough road but did well. Not this time.”

Harris is the first front-running candidate to abandon the race, and the third candidate this week to drop out, following Montana Gov. Steve Bullock (D) and former Rep. Joe Sestak (D). Her term in the Senate does not expire until 2022.

On Tuesday, just as she dropped out, a poll conducted for the Los Angeles Times by the Berkeley Institute of Governmental Studies found 61 percent of Democratic voters in California said she should quit the race.