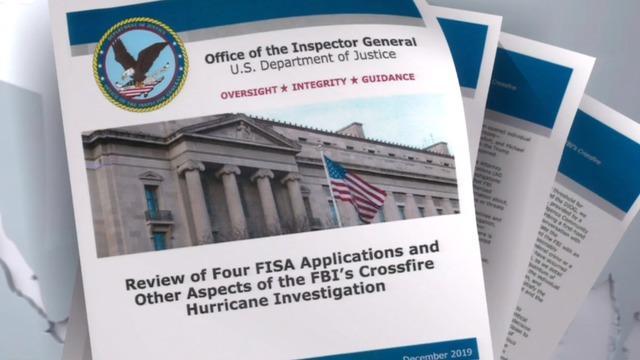 The Justice Department inspector general on Monday released a long-awaited report that found FBI agents were not motivated by political bias in opening investigations into associates of the Trump campaign in 2016.

Horowitz further concluded that the FBI had “an authorized purpose” to launch an investigation to “obtain information about, or to protect against, a national security threat or federal crime, even though the investigation also had the potential to impact constitutionally protected activity.”

The report found that the FBI launched its investigation into the Trump campaign, dubbed “Crossfire Hurricane,” after it received information from a friendly foreign government on July 28, 2016, that Papadopoulos had suggested the campaign received an indication that Russia could assist in the election process by releasing damaging information on then-Democratic candidate Hillary Clinton.

Horowitz did not find evidence that additional information was used as the basis to launch the investigation, but said the FBI and other intelligence agencies were already aware at the time of Russia’s efforts to interfere in the 2016 election.

The report undercut a key talking point of Trump and his Republican allies: that FBI agents were driven by bias against Trump and improperly targeted his campaign during the 2016 election cycle.

But the nearly 500-page report was critical of certain aspects of the FBI’s handling of the investigation, which is sure to provide fuel for Trump and his allies.

The inspector general outlined seven “significant inaccuracies and omissions” in its application to the Foreign Intelligence Surveillance Court (FISA) to monitor Page, some of them related to the FBI’s assertions or omissions regarding information they received from Christopher Steele, an ex-British intelligence who authored the notorious Trump-Russia dossier.

“We found that members of the Crossfire Hurricane team failed to meet the basic obligation to ensure that the Carter Page FISA applications were ‘scrupulously accurate,’” the report states.

“We concluded that these facts demonstrated a failure on the part of the managers and supervisors in the Crossfire Hurricane chain of command, including FBI senior officials,” the report states.

FBI Director Christopher Wray said in a lengthy response included in the inspector general’s report that the bureau accepted the investigation’s findings and would implement more than 40 “corrective steps” to address areas of concern outlined by Horowitz.

The bureau, which cooperated with the investigation, will modify its handling of FISA applications “to enhance accuracy and completeness,” Wray said, as well as reviewing its confidential human source program.

The FBI will also review and potentially discipline officials whose conduct was singled out in the report, Wray said.

Horowitz’s report is the product of a nearly two-year inquiry centered on the FBI’s actions in applying for and renewing a warrant to surveil Page, a former Trump campaign adviser, as part of the bureau’s original investigation into Russian interference.

But it is far from the final word on the investigation into 2016 election interference and the Trump campaign. The response to the report quickly fell along partisan lines, and even some in the Department of Justice (DOJ) pushed back on its key findings.

Attorney General William Barr said in a statement that the report showed the FBI “launched an intrusive investigation of a U.S. presidential campaign on the thinnest of suspicions.” Barr also said that, in his view, the FBI had an “insufficient” basis to justify steps taken in the investigation into the Trump campaign in 2016, putting him at odds with Horowitz.

“While most of the misconduct identified by the Inspector General was committed in 2016 and 2017 by a small group of now-former FBI officials, the malfeasance and misfeasance detailed in the Inspector General’s report reflects a clear abuse of the FISA process," Barr said.

U.S. Attorney John Durham, who is conducting his own probe into the origins of the investigation into Russian interference in the 2016 election at the direction of Barr, added that his own findings do not comport with all of Horowitz’s conclusions.

Trump weighed in during a roundtable Monday afternoon at the White House, calling the revelations a “disgrace” and an "embarrassment to our country, claiming the report showed officials attempted an “overthrow of government.”

“This was an overthrow of government, this was an attempted overthrow and a lot of people were in on it and they got caught, they got caught red-handed,” Trump said at the White House. “And I look forward to the Durham report, which is coming out in the not too distant future — it's got its own information, which is this information plus plus plus.”

White House counselor Kellyanne Conway, who served as the Trump campaign manager for the final months before Election Day, questioned Monday why the FBI did not provide a defensive briefing on its investigation at the time.

The report addresses that criticism. Former FBI official Bill Priestap said the bureau considered briefing the Trump campaign before launching Crossfire Hurricane, but decided against it out of concern that it could tip off any individual who was in fact working with the Russians and impede the investigation, according to the inspector general’s report.

The Horowitz report was released during a Judiciary Committee hearing where lawmakers debated evidence collected during the ongoing impeachment inquiry into Trump’s dealings with Ukraine. Some Democrats sought to tie the inspector general’s findings to the need to investigate the administration.

“President Trump is a continuing threat to our elections and the sanctity of our democracy,” the two lawmakers said.

Other Democrats declared that Horowitz’s findings shredded any claims that the FBI had investigated Trump based on political bias.

“It was never a witch hunt. It was the men and women of federal law enforcement doing their jobs,” tweeted Sen. Mark Warner (Va.), the top Democrat on the Senate Intelligence Committee.

Trump’s Republican allies were quick to harp on Horowitz’s findings about the FBI’s handling of the application to monitor Page, however, calling it a “stunning abuse of power” and portraying it as evidence of deep-rooted bias against the president.

"It is deeply disturbing. Some former FBI and DOJ officials are about to have some serious explaining to do," tweeted Rep. Mark Meadows (R-N.C.).

The report is also critical of the FBI over its handling of information from Steele, an ex-FBI informant who has been a flashpoint in Republican criticism of the FBI.

Steele was hired by research firm Fusion GPS to compile the dossier, which includes salacious and unverified allegations about Trump and his ties to Moscow and was funded in part by Democrats. Republicans have hammered the FBI for not adequately disclosing Steele’s link to Democrats in the application for the Page warrant.

The inspector general report states that “[t]he fact that the FBI believed Steele had been retained to conduct political opposition research did not require the FBI, under either DOJ or FBI policy, to ignore his reporting,” noting that the bureau often receives information from drug traffickers, felons and others who could have biases.

But the report says that when the FBI received information that raised “significant questions about the reliability” of Steele’s data, the bureau did not reassess his reporting used in the FISA application nor did it advise relevant officials of the new information.

“We also found that the FBI did not aggressively seek to obtain certain potentially important information from Steele. For example, the FBI did not press Steele for information about the actual funding source for his election reporting work,” the report states.