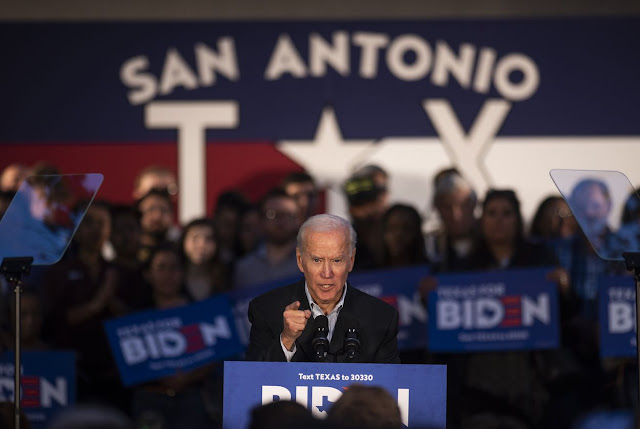 By Alex Samuels and Patrick Svitek

Democratic presidential candidate Joe Biden on Friday vowed to lavish the state with attention as Texas is increasingly considered a potential battleground in 2020.

“You’ll be seeing a lot of me before now and November, God willing,” he told a brimming crowd at a campaign rally here Friday evening. “Because if I’m honored to win this nomination, I’m gonna compete here in Texas to win Texas — to win Texas.”

Speaking in front of supporters waving “Texans for Biden” signs, Biden cast the 2020 election as a battle for the “soul of the nation.” During what his campaign billed as a “community event,” he emphasized his commitment to improving the lives of veterans and reforming the immigration system, both major issues in a city known as Military City USA and the gateway to South Texas. He also told the crowd his plans to “reverse the damage” he said has been done by President Donald Trump and protect returning veterans.

Turning to politics, Biden brought up Trump’s obsession with his son’s work in Ukraine that has led to the current impeachment process in Congress. The Trump campaign has already aired millions of dollars in ads targeting Biden over the Ukraine affair.

“I wonder why he doesn’t want me to be the nominee?” Biden said. “Folks, with your help, I’ll beat him and I’ll beat him like a drum.”

While Biden had harsh words for Trump, he did not spare some of his primary rivals as well. He said “a couple candidates out there are attacking me and the very idea ... we can unite the country” — an apparent reference to Elizabeth Warren’s speech Thursday insinuating Biden was naive for thinking Democrats and Republicans can work together again.

“Last time I checked, this was called the United States of America,” Biden said. “Anyone who starts off saying we can't bring America together — you’re just throwing in the towel. You’re saying everything Donald Trump has been saying — the divider-in-chief.”

In an interview with The Texas Tribune prior to addressing a crowd of roughly 600, Biden said he believed the field would be winnowed down by the time of the Super Tuesday primaries in March. He wouldn’t speculate if he’d be the presumptive nominee by then, but exuded confidence in his chances in the state.

“We’re putting together an organization I’m really proud of,” Biden said. “I think we have a real good shot of not only winning in Texas, but winning the nomination.”

His conviction comes as recent polls show Biden trouncing all of his Democratic rivals in Texas. According to a CNN poll released earlier this week, 35% of voters likely to vote in the state’s Democratic primary said they’re likely to support the former vice president. His closest competitor, U.S. Sen. Bernie Sanders, I-Vt, netted 15% of the vote.

In the poll’s hypothetical head-to-head matchup against Trump, Biden only trailed the president by one percentage point.

“Texas is rethinking what direction it wants to see the country move,” Biden told the Tribune. “I really do think everybody understands that this may be the most important election they’ve ever participated in — no matter how old or how young they are.”

“This is consequential,” he said. “Four more years of Donald Trump could fundamentally change the character of this country for a couple of generations and I think people know it.”

Biden is slated to hold a fundraiser later Friday at the home of local trial lawyers Anna and Jamie Shaw. Mikal Watts, another trial attorney and a prominent Democratic donor, is also hosting the fundraiser, and U.S. Rep. Filemon Vela of Brownsville is being billed as a special guest.

The former vice president has moved to shore up his Texas credentials in recent months. In November, he hired Dallas-based Democratic strategist Jane Hamilton as his Texas state director and he boasts the most endorsements from the Texas congressional delegation (four) and is tied with Julián Castro in state Senate supporters (three).

Biden said he has “enormous” respect for Castro, the remaining Texan in the race, and O’Rourke, but positioned himself Friday as the candidate best equipped to take on Trump nationally and to win over the state’s voters. He pointed to his experience campaigning for Lloyd Bentsen, the last Democrat elected to the U.S. Senate from Texas in 1988.

“I’m not suggesting I know Texas intimately well, but I know it well and I think you’ve got enormous potential here and there’s so many things Texas can do,” he said.

Biden also said he’s been in contact with both Texans. He joked that he left a voicemail with O’Rourke prior to arriving in San Antonio to ask his blessing in visiting the state, and said he hoped the former El Paso congressman would stay engaged in both national and Texas politics despite being out of the presidential race.

Biden said he hadn’t reached out to O’Rourke to ask for his endorsement since the Texan abandoned his White House bid in early November, but did reach out to him the day he dropped out to see if it’d be OK — at “an appropriate time” — to poach some of his campaign staff.

Regarding Castro, Biden said he harbored no hard feelings for the former U.S. Housing Secretary after the two butted heads at a Democratic primary debate in Houston. “I’m not very good at holding grudges,” Biden said, laughing.

He added that it was presumptuous to discuss who he might have in his administration, or on his ticket, before winning the nomination, but didn’t completely dismiss the idea of inviting either one or both Texans to the White House with him if elected.

“I can assure you my request is for them to stay involved, and if I were to win the presidency I would very much want them to be involved,” he said.