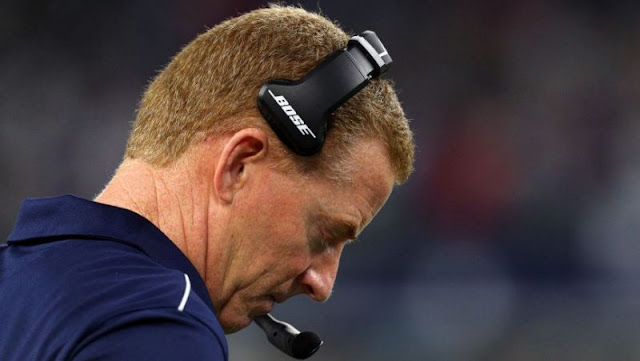 After the Dallas Cowboys flamed out in spectacular fashion in the NFC East title game, Jason Garrett should finally be out of chances to save his job.

The NFC East wasn’t officially clinched Sunday, but the Dallas Cowboys’ season is all but over after falling 17-9 to the Philadelphia Eagles at Lincoln Financial Field. Despite possessing the superior quarterback, running back, offensive line, wide receivers and defense, Garrett’s Cowboys found a way to lose to an Eagles’ team that was so depleted at the receiving corps that it started Greg Ward and J.J. Arcega-Whiteside on the outside.

Cowboys’ owner Jerry Jones has been patient to a fault with head coach Garrett, and this should be the loss that sees Jones’ patience finally run out. Garrett has completely underachieved with this Cowboys’ roster, which on talent alone is as good as any team in the NFC, but will be headed home in January barring some help from the four-win New York Giants next Sunday.

There was plenty of questionable coaching decisions from Garrett, but the biggest criticism belongs to the fact that the Cowboys pretty much abandoned the running game, giving Ezekiel Elliott only 13 carries for 47 yards. The game was never completely out of reach, but Garrett kept dialing up passes for Dak Prescott, who missed practice time this week with a shoulder injury and looked off for most of the afternoon.

The Dallas’ defense was also completely shredded by Carson Wentz and his rag-tag group of pass catchers, with the Eagles’ quarterback completing 31-of-40 passes for 319 yards and a touchdown. Outside of Zach Ertz, who played through a rib injury, and Dallas Goedert there was no one on the Eagles’ roster the Cowboys shouldn’t have been able to handle in pass coverage.

It was also alarming that Philadelphia seemed more up for the moment than Dallas was in a de facto elimination game. The home field edge certainly helped the Eagles, but the Cowboys were just not set up for success in a do-or-die moment, and that goes back to the head coach.

The Jason Garrett era may go on for another week, but its unofficial end came at the Linc.