If Washington saw Dems and GOP today, he would say: 'I told you so!' 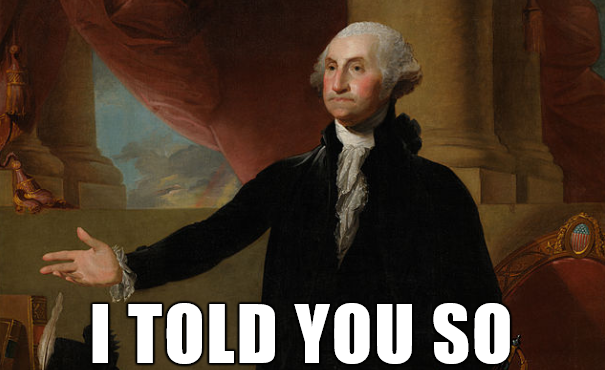 When George Washington became President of the United States in 1789, there were no political parties.

Political parties first emerged during Washington’s first term in office with the Alexander Hamilton’s Federalist Party in 1791 and in the following year, the formation of the Anti-Federalist Party or Democratic-Republicans under the leadership of Thomas Jefferson.

The two political parties formulated their views of how government ought to operate in the new republic.

At the end of Washington’s first term, as he was preparing to retire and go back to Mt. Vernon to just be a farmer again, the leaders of the opposing parties both wanted him to reconsider with Hamilton and Jefferson pleading with Washington to stay on for a second term.

Jefferson is credited as stating: “North and South will hang together if they have you to hang on.”

Washington finally consented to such sentiments and was again the obvious choice of the Electoral College as they re-elected him in February of 1793.

During Washington’s second term, the divisions between the two political parties became defined. A good part of the underlying differences between the two factions centered on the French Revolution (1789-1799).

Jefferson had been in France as the U.S. Minister where he was witness to the beginning of the end of the French monarchy. France’s King Louis XVI was eventually guillotined in March of 1793 and Jefferson, as Washington’s Secretary of State, favored U.S. support of the new French Republic and the revolutionaries.

Being more cautious, Washington issued the Neutrality Proclamation in May and Jefferson, disgusted with having to tolerate Washington’s policies, resigned his Secretarial post at the end of that year.

As war broke out in Europe between the new French Republic and the European monarchs, Washington resisted taking sides even though the Federalists were inclined to ally with Great Britain during this widespread European conflict.

By refusing to come to the aide of France, Washington earned the wrath of the Democratic-Republican Party members, several of whom were newspaper editors.

Despite the attempt to remain neutral, American merchants still traded with both countries, to the ire of the British who started confiscating American ships and cargo that were destined to France or French territories.

The British captured nearly 300 ships near the West Indies alone, and the concept of neutrality became a feeble cause.

In 1795 Washington sent Supreme Court Chief Justice John Jay to negotiate a treaty with the British regarding restitution of the lost ships and a number of outstanding issues with the motherland leftover from the revolution.

Neither the Democratic or Republican party were pleased by The Jay Treaty and it fell short of Washington’s objectives.

However, the greatest opposition to Washington was the appearance that he had taken sides in the securing of a trade agreement with Great Britain.

Congress had to debate the treaty behind closed doors due to the controversy, and when the public learned of the terms, Washington’s decision was attacked throughout all the states.

When Alexander Hamilton appeared at a meeting in his home state of New York to explain the benefits of the treaty, crowds hissed and booed and some even threw stones at the Secretary of the Treasury.

Party lines and loyalty were drawn to the point of personal bitterness and public destructiveness. Such division along party lines represented the most severe split between the two political factions since the inception of the republic. It made a deep impact upon Washington and the memory must have been in his mind as he wrote about the very real capacity of political parties to destroy the fragile unity holding the nation together.

It is not that Washington failed to understand the contribution of parties, but he was greatly concerned that they had previously, and would again, grow seeking more power than other groups to the detriment of the whole.

Washington was aware that other governments viewed political parties as destructive because of the temptation to manifest and retain power, but also because they would often seek to extract revenge on political opponents.

He viewed this to be detrimental to the young country as an entire nation.

He also saw the dangers in sectionalism (North vs. South) and warned that political factions gaining enough power could seek to obstruct the execution of the laws that were created by Congress and could prevent the three branches from properly performing their duties as outlined in the Constitution.

President Washington expresses genuine concern in that “the alternate domination” of one political party over another, thereby allowing one party to enjoy temporary power over the government that would use it to obtain revenge on the other.

He felt that this tendency toward atrocities directed at the party out of power “…is itself a frightful despotism. But this leads at length to a more formal and permanent despotism.”

Reading the words of his Farewell Address, an adept reader may be astounded at how remarkably prophetic they are:

The disorders and miseries which result gradually incline the minds of men to seek security and repose in the absolute power of an individual; and sooner or later the chief of some prevailing faction, more able or more fortunate than his competitors, turns this disposition to the purposes of his own elevation, on the ruins of public liberty.

Without looking forward to an extremity of this kind (which nevertheless ought not to be entirely out of sight), the common and continual mischiefs of the spirit of party are sufficient to make it the interest and duty of a wise people to discourage and restrain it.

It serves always to distract the public councils and enfeeble the public administration. It agitates the community with ill-founded jealousies and false alarms, kindles the animosity of one part against another, foments occasionally riot and insurrection. It opens the door to foreign influence and corruption, which finds a facilitated access to the government itself through the channels of party passions. Thus the policy and the will of one country are subjected to the policy and will of another.

Washington argued that political parties needed to be restrained in a free country with a government empowered by the consent of the governed and established through popular elections. He warned of the possibility fearing they could distract the government from its required duty to the people and even lead to the eradication of the freedoms established by the founding.

America is at the mercy of two powerful political parties. If a strong candidate wants to get elected to office in this country, one usually needs some affiliation to the major parties.

We see from history that third party forays are limited in strength and often serve only to undermine one or another of the major parties in the capacity of a “spoiler.”

If Washington could see America now, probably the only thing that he could say after getting over the shock, would be: “I told you so!”