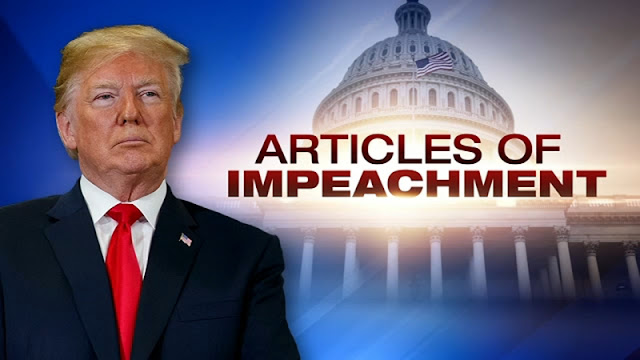 House Democrats are poised to take the historic step of impeaching President Trump on Wednesday, marking what will be the most partisan vote to remove a sitting president since the country's founding.

The highly divisive vote — packed into the very last week of the legislative year — is sure to exacerbate tensions in Washington and around the country heading into a crucial election year, when echoes of impeachment could play an outsize role up and down the ballot.

The Democrats’ decision to bring impeachment to the floor caps months of House investigations into Trump’s dealings with Ukraine, and will kick the impeachment process over to the Senate, where GOP leaders are expected to stage a trial early next year that's likely to end in Trump's acquittal.

Democratic leaders, after rejecting impeachment for much of the year, reversed course in September, following allegations from a government whistleblower that Trump had leveraged U.S. military aid and a White House meeting to press Ukrainian officials to investigate his political rivals.

The House probe led to the drafting of two impeachment articles charging Trump with abusing power and obstructing Congress. Wednesday’s votes on those measures — while energizing the party’s liberal base — pose a political risk for a number of centrist Democrats, particularly the 30 lawmakers representing districts carried by Trump in 2016.

Even so, those same vulnerable Democrats have overwhelmingly dismissed the political threat and emerged, one by one, in recent days to announce their support for both articles, all but ensuring easy passage when they hit the floor.

“It became clear to me that he did, in fact, withhold critical military aid from a security partner in order to investigate — or attempt to have a foreign power investigate — an opponent of his in our democratic election process,” freshman Rep. Mikie Sherrill (D-N.J.), a Navy veteran from a Trump-won district, said Tuesday, just after announcing her support for the articles.

Democratic leaders are expecting only two defectors — Reps. Collin Peterson (Minn.) and Jefferson Van Drew (N.J.) — to join Republicans in opposing both articles. A third Democrat, Rep. Jared Golden (Maine), said he will split his votes, supporting the abuse of power charge but not obstruction of Congress.

Both articles are expected to pass, making Trump just the third president to be impeached in U.S. history — and the first to run for reelection afterward.

Democratic leaders are not whipping votes for support, calling the impeachment vote one of conscience. They’re dismissing the notion that vulnerable Democratic supporters will face a backlash on Election Day.

Republicans, who have been pushing to maximize Democratic defections, watched this week as the number crept lower and lower with each new endorsement. Still, Republicans notched a victory when Van Drew, after huddling with Trump at the White House, signaled he would soon abandon the Democratic Party.

In a cryptic conversation with reporters on Tuesday, however, Van Drew declined to say not only when he would make the jump, but if he would at all.

“I have not made a decision that I'm willing to share with anybody,” he said. “I am where I am. And you'll hear in a relatively short period of time.”

House Republicans, meanwhile, appear to have maintained a strong firewall in opposing the two articles heading into the vote, with no GOP members visibly supporting impeachment and only a handful publicly denouncing Trump’s contacts with Kyiv.

Only one Republican, Rep. Francis Rooney (Fla.), has declined to say how he’ll vote. But on Tuesday he criticized Democrats for moving too quickly through the process, suggesting he’ll join his GOP colleagues when the articles come to the floor.

“I've gone from being open and wanting to hear all the facts to being extremely frustrated and disappointed that the Democrat process didn't slow down,” Rooney, who’s retiring at the end of this Congress, told CNN.

The near-unanimity expected from both sides on Wednesday means Trump's impeachment will be much more partisan than that targeting former President Clinton in the late 90s.

In the Clinton impeachment vote, five Democrats split with their party and joined Republicans in supporting three of the four articles of impeachment, while one Democrat supported all of the charges.

Many who lived through the Clinton impeachment period say it was the beginning of the end of bipartisanship in Congress.

The dramatic move to impeach Trump comes less than a year after Democrats regained the House majority and after months of investigations into Trump’s conduct, beginning first with investigations into former special counsel Robert Mueller's report on Russia's election interference and then into Trump's actions related to Ukraine.

While both sides have alleged that the other party is seeking to undermine the upcoming presidential election — with Democrats pointing to Trump’s request for a Biden probe and Republicans pointing to the impeachment vote ahead of an election year — Republicans also say the ballot box will serve as a faster judge on the impeachment inquiry than those writing the history books.

“This is nothing more than an illegal, partisan attempted coup that will, based on recent sentiment, badly fail at the voting booth. You are not just after me, as President, you are after the entire Republican Party,” Trump wrote in a scathing letter to Speaker Nancy Pelosi (D-Calif.) on Tuesday.

“History will judge you harshly as you proceed with this impeachment charade,” the president added, describing efforts to remove him as an “impeachment fantasy.”

Democrats have dismissed the GOP allegations, saying their choice is a matter of principle, not politics.

“Very sadly, the facts have made clear that the President abused his power for his own personal, political benefit and that he obstructed Congress as he demanded that he is above accountability, above the Constitution and above the American people. In America, no one is above the law,” Pelosi wrote Tuesday in a "Dear Colleague" letter ahead of the high-stakes votes.

“During this very prayerful moment in our nation’s history, we must honor our oath to support and defend our Constitution from all enemies, foreign and domestic.”