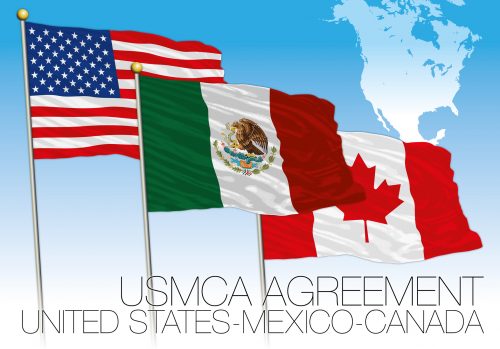 The House on Thursday passed a bill to implement President Trump’s overhaul of the North American Free Trade Agreement (NAFTA), advancing a crucial piece of his economic agenda with strong bipartisan support.

The bill to enact Trump’s U.S.-Mexico-Canada Agreement (USMCA) passed 385 to 41, with 38 Democrats, two Republicans and Rep. Justin Amash (I-Mich.) voting against the deal. The measure now moves to the Senate, where it is expected to pass after the chamber concludes Trump’s impeachment trial.

The USMCA’s passage in the House marks one of the most significant bipartisan breakthroughs in a bitterly divided Congress. The resounding bipartisan vote comes less than 24 hours after the House voted almost exclusively along partisan lines to impeach Trump, who is unlikely to be convicted and removed from office by the GOP-held Senate.

Speaker Nancy Pelosi's (D-Calif.) announcement last week that Democrats had reached a deal with Trump to pass USMCA was just an hour after telling the country her caucus would introduce articles of impeachment against the president.

Despite the shadow of the House’s indictment, Trump and lawmakers in both parties hailed USMCA as a boon for U.S. workers, manufacturers and farmers.

"Due to Democrats' misguided obsession with impeachment, they neglected moving forward on this pro-worker and pro-growth trade agreement for far too long," said Rep. Kevin Brady (R-Texas), ranking Republican on the House Ways and Committee. "Nonetheless, today I am so encouraged that we're here finally moving forward."

House Majority Leader Steny Hoyer (D-Md.) offered similar praise for the bipartisan work on the deal while navigating the partisan tensions over impeachment.

“This vote today, Madam Speaker, is a reminder that even while the House was working on a serious matter regarding the president's accountability for abuses of office, we are still working hard to deliver on our promises to the American people to focus on economic opportunity,” he said. “And in this instance, we are working together.”

USMCA may also prove to be a political win for both Trump, who pledged to rip up NAFTA in 2016, and vulnerable Democrats eager to show moderate voters they can legislate amid impeachment.

Trump’s scorn for NAFTA was crucial to his support among disaffected Democrats in industrial states that lost thousands of jobs under the 1994 pact. His vow to replace NAFTA helped propel him to electoral victories in Michigan, Wisconsin and Pennsylvania, which had reliably supported Democratic presidential candidates since 1992.

Democratic lawmakers have also been fiercely critical of NAFTA, and many were eager to team up with Trump to rewrite the agreement.

Pelosi brushed off concerns that Democrats could give Trump “a victory to boast about,” calling it a “collateral benefit if we can come together to support America's working families.”

“The president wants to take credit? So be it. That would not stand in the way of our passing this," she said.

"House passage of the USMCA with such huge bipartisan support is a major milestone and shows just how much President Trump is successfully changing U.S. trade policy so it works for the benefit of American workers, farmers, ranchers and businesses," Lighthizer said in a statement following the vote.

Democrats were able to add a provision to create independent panels to ensure Mexican factories are complying with the agreement, and allow the U.S. to impose tariffs on firms that violate the deal’s labor standards.

The revised agreement also limits the ability of companies to sue countries over regulations that could impede their international sales, a long-standing Democratic goal. They were also able to strip USMCA of a measure to lock in 10 years of market exclusivity for biologic drugs, arguing the provision would inflate high prescription drug prices.

"On every conceivable front, we have improved the old NAFTA,” said House Ways and Means Committee Chairman Richard Neal (D-Mass.), the Democratic leader on trade policy.

“You can vote for what we've negotiated, or you can embrace the status quo. If this fails today, that's precisely what you're doing."

The changes were enough to win over some of the fiercest Democratic critics of free trade deals, including Sen. Sherrod Brown (D-Ohio) and Rep. Rosa DeLauro (D-Conn.), who blame NAFTA for thousands of job losses in their states.

“I was determined to make sure that any new trade agreements did not undermine U.S. wages and salaries, accelerate outsourcing, or continue to hurt working people,” wrote DeLauro, one of the chief Democratic negotiators in talks with Lighthizer, in a Friday letter to colleagues.

“USMCA is not a model moving forward, but it establishes important principles we can build from.”

The endorsement of powerful labor groups such as the AFL-CIO and the United Steelworkers also ensured USMCA would have ample support in the House.

Not all of DeLauro’s progressive colleagues were convinced, including Rep. Bill Pascrell (D-N.J.), who bristled at Neal’s pitch to support USMCA and not maintain the status quo. He argued that the deal would still treat Mexican workers “like chattel” and “American jobs would still flow to other countries."

“Me and the status quo don't agree most of the time,” Pascrell said. “I mean, I even got a Jerry Garcia tie on today.”

Other influential unions such as the International Association of Machinists and Aerospace Workers and the United Food and Commercial Workers International Union (UFCW) also voiced concerns about the deal.

But that Brown, DeLauro and organized labor could support a trade deal proposed by a Republican president reflected the ways Trump has transformed the congressional landscape on trade policy. Several Republican senators griped that USMCA had drifted too far in labor’s favor and would hinder the deal’s fundamental goal of reducing trade barriers.

Some Republican senators are expected to vote against USMCA. Sen. Pat Toomey (R-Pa.), a staunch conservative, said he would oppose the deal over its “myriad provisions to warm the hearts of protectionists.” Other like minded Republicans are expected to follow.

Even so, Senate Republicans will almost certainly cement a key pillar of Trump’s economic agenda despite their ideological misalignment with the president.