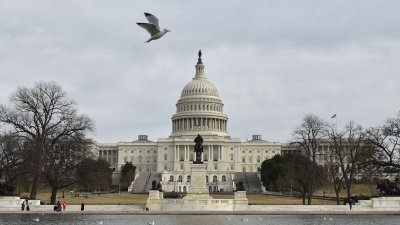 The House on Tuesday approved $1.4 trillion in spending in a pair of bills funding the federal government for the rest of the fiscal year.

The House overwhelmingly passed the pair of bills, with the first passing on a 297-120 vote and the second passing 280-138. Both measures now head to the Senate.

The Senate is expected to approve both before leaving for the week, and the White House has indicated that President Trump will sign them into law.

Passage of the legislation concludes a lengthy debate that had raised the risk of a government shutdown — or the more likely possibility that Congress would have to approve a stopgap measure that would keep the government open, but would not put any new imprint on spending.

Instead, the House and Senate reached a deal on all 12 annual spending bills, punting on at least one divisive issue that had threatened the talks: Trump’s demands for funding for his border wall.

The Homeland Security bill left in place the same $1.375 billion for erecting border barriers that negotiators agreed to last year, with similar restrictions. It also leaves the number of detention beds for Immigration and Customs Enforcement (ICE) flat, and imposes no restrictions on Trump’s use of emergency powers to reprogram defense funds toward his wall, though courts have blocked those actions at least temporarily.

“I know how much work is involved in reaching an agreement on funding bills. Nobody, not one of the 400 and I guess 33 of us that are here, got everything they wanted, believes this is a perfect bill,” he said on the floor ahead of the vote.

“But it is a work product worthy of the Appropriations Committee and the House of Representatives and of our country. It makes compromises, which is absolutely essential. It takes a lot of late hours, caffeine and placing trust in colleagues across the aisle to achieve that objective.”

The agreement is a departure from the deep political rancor and brinksmanship that marked negotiations in the first two years of Trump’s presidency. Last year, disagreement over wall funding led to a 35-day partial shutdown, the longest in the nation’s history, after which Trump controversially declared a national emergency in order to reprogram defense and military construction funds.

But the compromise didn’t sit well with the Congressional Hispanic Caucus (CHC), who had pushed for more ICE restrictions and fewer beds.

Many members of the CHC voted against the spending package in protest. The Congressional Progressive Caucus (CPC) also came out against the bill.

“The bill before us today will not stop the abuse and wrongful detention of people in custody, nor will it prevent the Trump Administration from misusing federal funds to advance their horrific mass detention and deportation agenda,” said CPC co-chairs Reps. Mark Pocan (D-Wis.) and Pramila Jayapal (D-Wash.).

“We also find it offensive that at a time when millions of families can’t afford to put food on the table, this bill wastes $1.375 billion on the pointless, immoral border wall.”

The House Freedom Caucus also opposed the bill, arguing it added to the deficit and failed to provide adequate funding for border security.

The bill includes a $22 billion increase in annual defense spending, a sum short of what Trump demanded but nonetheless a victory for the White House, and a 3.1 percent pay raise for the military, the largest increase in a decade.

It also included funding for a slew of programs and Democratic priorities, including $7.6 billion to fund the 2020 census, increases in funding for the National Science Foundation, NASA and climate research through the National Oceanic and Atmospheric Administration.

Democrats secured $425 million for election security grants ahead of the 2020 election. The bill also included funds to digitize $24 billion worth of uncollected bonds to help pay them out to bondholders who never collected.

“With this bill, we have lived up to that promise by making historic investments For The People,” said House Appropriations Committee Chairwoman Nita Lowey (D-N.Y.). “I am so proud that we are able to do so much good for children and families across the country and around the world.”

The package invested in a slew of social programs, such as early education, jobs training and veterans. It added $2.6 billion to the National Institutes of Health, and funds programs on a slew of health initiatives ranging from HIV to cancer to opioid addiction.

It eliminated three unpopular taxes that were put in place as part of ObamaCare.

It would repeal the Affordable Care Act’s “Cadillac tax,” which places a 40 percent levy on high-end health plans; an annual fee on health insurance providers; and the medical device tax.

The bill would provide $25 million to the Centers for Disease Control and Prevention and National Institutes of Health for gun violence research, a big win for Democrats.

It also provide a 3.1 percent pay raise for federal civilian employees, but negotiators opted not to include language to provide Congress with a pay raise, which is expected to remain stagnant.

Congress agreed not to backfill $3.6 billion worth of funds to military construction programs Trump sought to redirect toward building the border wall.

Democrats failed to include language pushing back on Trump’s restrictions on abortion providers, which pushed Planned Parenthood to reject federal Title X funding this year.

In addition to funding the departments and agencies, the bill includes several controversial provisions, including one that would raise the age to buy tobacco from 18 to 21. Another was the SECURE Act, expanding access to retirement savings.

A late-night deal on tax extenders prevented a slew of tax breaks from expiring, and revived several that expired in the past two years, but did not include renewable energy and electric car credits.