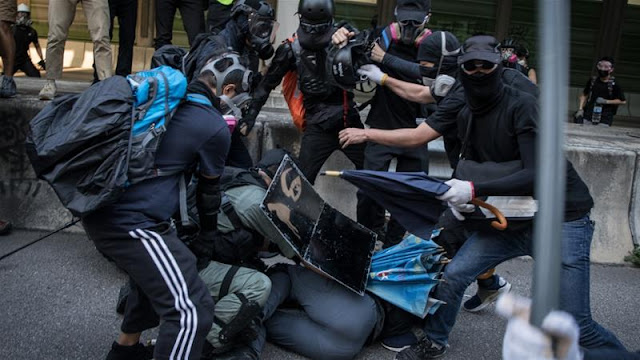 Police clashed with demonstrators in the heart of Hong Kong’s financial district on Sunday as protesters rallied in support of Uighurs in China, Reuters reports.

The protest comes after Arsenal midfielder Mesut Ozil, a German Muslim of Turkish origin, tweeted that the Uighurs are “warriors who resist persecution."

Ozil criticized China’s policies against the ethnic group as well as the silence of Muslims in response. China later pulled a soccer match between Arsenal and Manchester from its broadcasting station after Ozil’s comments.

Nearly 22 members of the United Nations Human Rights Council condemned China’s mass detention of Uighurs earlier this year. The U.N. claims at least 1 million Uighurs and other Muslims have been detained by China in the western region of Xinjiang.

Beijing denies any mistreatment of Uighurs and claims it is providing vocational training to help stamp out separatism and to teach new skills, according to Reuters.

Protesters have been demonstrating in Hong Kong for more than half of the year. They claim that Beijing has been interfering in the “one country, two systems” rule put in place when Hong Kong was returned to Chinese rule in 1997.

The riot police also chased off and arrested shoppers in malls during the busy pre-Christmas shopping weekend, according to the news service.