Hillary is doing what Hillary does 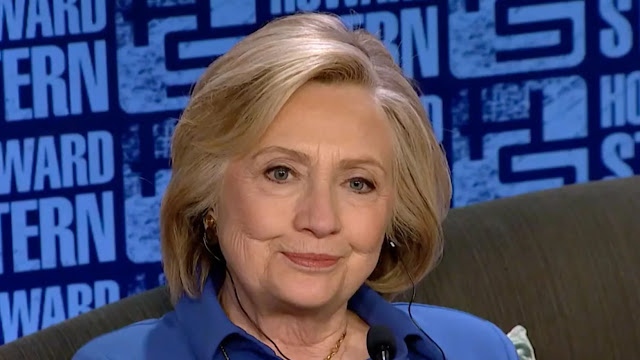 Some folks are thinking Hillary Clinton’s recent appearance on the Howard Stern Show amounts to her “biggest hint yet that she’s mulling a 2020 presidential run.” Clinton is ostensibly on tour to promote one of those “book projects” — I didn’t say “books” — slapped together by ghostwriters that she and her daughter keep putting their names on for the apparent sole purpose of giving them a hook for television appearances.

On the Stern show, Clinton more or less dropped the pretense that she was there to promote a book. She was there to promote herself, and Stern’s style provides a nearly unique opportunity for anyone who wants to come across as human and genuine. Stern thinks that Clinton’s avoidance of his show in 2016 cost her the election. She certainly could have used some help in the human-and-genuine department. Stern reaches exactly the sort of audience Hillary needs to hate her a bit less.

Where I differ is on this point: Clinton isn’t doing anything new. She keeps saying the same thing in slightly different ways. What she’s saying is this: I am open to running again, so please, American people, beg me to get in this race. She’s doing this because she wants the pollsters to go out and see if she would vault to the top of the field. She sent her Renfro, Philippe Reines, out more than a year ago to beg pollsters and pundits to add her to the list of contenders: “It’s curious why Hillary Clinton’s name isn’t in the mix — either conversationally or in formal polling — as a 2020 candidate,” Reines said last October. “She’s younger than Donald Trump by a year. She’s younger than Joe Biden by four years. Is it that she’s run before? This would be Bernie Sanders’ second time, and Biden’s third time. Is it lack of support? She had 65 million people vote for her,” etc.

Yet the only people who want Hillary to run are comics, Republicans, Republican comics . . . . people like me. Democrats realize she blew it. Democratic fundraisers are furious with her for being such a poor candidate that she created the Trump presidency. There was an open path to the White House, she had a huge fundraising advantage, she had only token opposition from a batty old socialist in the primary, she had Barack Obama’s blessing, and she lost against a total novice because people just can’t stand her. Her token opposition turned into the siege of Leningrad. Her convention speech underwhelmed. She did not and indeed could not explain the clandestine means she set up for removing her communications from public scrutiny, committing the felony of taking classified information out of secure channels in the process. She did not and indeed could not offer a better rationale for her candidacy than a combination of “I deserve this” and “Trump is worse.”

This is not to say she won’t run. Maybe she will. Lately she has taken to skipping the part in which she persuades the public to clamor for her and has taken to claiming, with zero evidence, that she has been “deluged” with entreaties to run. “I’d have to make up my mind really quickly,” she said on the U.K.’s Graham Norton Show, “because it’s moving very fast.” She has been saying a version of this ever since 2016, making it clear that she is not retired and could be persuaded to run. Usually she says, in the same interview, some variant of “I’m not running,” meaning not currently running, and Democrats choose to hear that part of it because they’re sick of her.

But how would Hillary even run a campaign? She is now well to the right of the thinking of the party. She was instrumental to the passage of the Defense of Marriage Act. She voted for the Iraq War and continued to support it for years. She’s way too old to portray herself as a force for radical change. So she’d go after Biden voters, I guess. Maybe she sees delegates being divided among her, Biden, and three or four other candidates. Maybe she foresees a brokered convention from which she emerges as the Hubert Humphrey-style safe choice amid 1968-like chaos. Could Milwaukee 2020 be Chicago 1968? That’d be fun to watch.