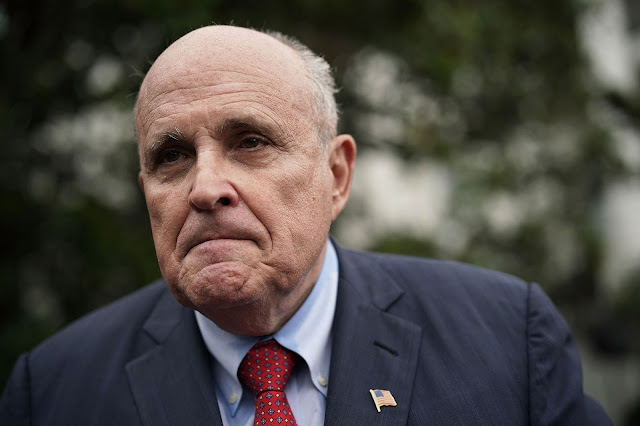 Rudy Giuliani, the president's personal attorney, traveled to Ukraine this week even as an impeachment process focused in part on his involvement in the Trump administration's policy toward Ukraine accelerated.

Giuliani met with multiple Ukrainian officials as he continued his effort to counter House Democrats’ impeachment probe and paint an investigation into the Bidens as a matter critical to the relationship between the two countries.

The trip is sure to draw scrutiny from Democrats, who could draft articles of impeachment against President Trump in a matter of days accusing him of abusing his office by pressuring Ukraine to investigate his political rivals, including Democratic presidential candidate Joe Biden.

Giuliani has been a central figure in House Democrats’ investigation into Trump’s conduct. He is also reportedly the subject of an ongoing investigation in the Southern District of New York.

Photos posted on social media show Giuliani met during the week with a former Ukrainian diplomat who has propagated an unsubstantiated theory that Ukraine meddled to help Democrats in the 2016 election. He also huddled with a Ukrainian lawmaker who proposed a joint corruption investigation between the U.S. and Ukraine.

Giuliani tweeted Thursday that an investigation into Biden's conduct has not been resolved and until it is will be a major obstacle to the US assisting Ukraine with its anti-corruption reforms.”

Trump has defended Giuliani in recent weeks when the former New York City mayor has come up in impeachment proceedings, hailing him as a great crime-fighter who cares about corruption.

But the president sought some distance when he denied late last month that he had directed Giuliani to go to Ukraine on his behalf.

A White House spokesman said Friday that, to his knowledge, Giuliani is still the president's personal attorney, but it was unclear if Trump was aware of Giuliani’s latest activities in Ukraine.

The New York Times first reported that Giuliani met in Budapest with former Ukrainian prosecutor Yuriy Lutsenko, who Democrats have accused of being part of a smear campaign to oust the former U.S. ambassador in Kyiv.

A crew from the conservative One America News Network (OAN) was also in tow to film Giuliani's meetings as part of a counter-narrative to the impeachment hearings.

Giuliani could not be reached for comment, but his tweets posted throughout his trip gave a glimpse into his effort to dredge up damaging information about Trump's political opponents.

“In reviewing my notes, it seems to me that a large-scale joint investigation into Ukraine and the US would uncover and recover billions stolen by crooks, from both countries, at the highest levels,” Giuliani tweeted Friday. “This would be the most effective way to bring our two countries together.”

The idea of a joint investigation appeared to stem from a meeting with Andriy Derkach, an independent Ukrainian lawmaker who previously served as a member of a pro-Russia party in parliament and as head of Ukrainian intelligence. He reportedly attended a KGB-affiliated high school in Moscow.

Derkach posted a photo of a meeting with Giuliani on Facebook. The two men can be seen holding a document up, and Derkach wrote that they discussed a joint commission to tackle corruption.

Giuliani also met with former Ukrainian diplomat Andrii Telizhenko, who has made the dubious claim that he was instructed to gather damaging information about former Trump campaign chairman Paul Manafort.

“Thank you @RudyGiuliani for your work and what you do for @realDonaldTrump, because we are fighting for the #TRUTH!” Telizhenko tweeted Friday with photos of himself and Giuliani.  “You are a great friend of Ukraine and a Patriot of US. Hope to see you soon back in Kyiv.”

Giuliani's trip came on the heels of a 300-page report from the House Intelligence Committee alleging that Trump made U.S. security aid and a White House meeting for Ukraine conditional on the country announcing investigations into Trump’s political rivals.

Government officials testified last month that it was Giuliani who was urging Ukraine to announce those investigations, and they alleged that the president's personal attorney was conducting a shadow foreign policy outside of regular diplomatic channels.

Giuliani maintained that he was acting on behalf of his client and has insisted he will ultimately produce information that undercuts claims against Trump.

He was further drawn into the impeachment inquiry when the House Intelligence Committee obtained phone records that showed him in frequent contact with the White House on Aug. 8.

Giuliani and Trump have both downplayed the call records.

“You know, is that supposed to be a big deal?” Trump said when asked about the records during a NATO meeting. “I don’t think so. Rudy is a great gentleman, and they're after him only because he's done such a good job.”

But Trump's allies have long been uneasy about Giuliani’s role, particularly given his propensity to make new revelations during television appearances.

Giuliani's latest trip drew more skepticism from some in the GOP, even among Trump's fiercest defenders.

“I think it’s a little weird that Rudy Giuliani is over in the Ukraine right now, and I’m not here to defend Rudy Giuliani,” Rep. Matt Gaetz (R-Fla.) said on CNN. “There’s apparently an investigation going on and that will go where it goes.”

Gaetz added that it would be “helpful” if the former mayor clarified the role he’s playing in Ukraine.

“But the Rudy Giuliani I know is the Rudy Giuliani who, like, fought the mob when it wasn’t a popular thing to do,” Gaetz said. “He’s someone who put his life on the line in 9/11, so if there’s anyone that ought to maybe get the benefit of the doubt, it would probably be Mayor Giuliani.”