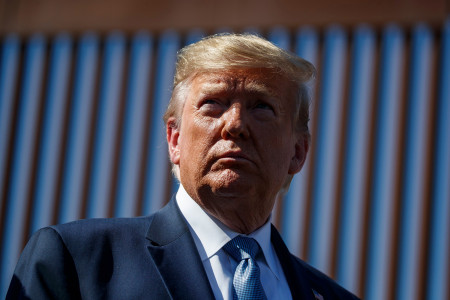 A federal judge on Wednesday blocked President Trump from using Defense Department funds for the construction of his border wall.

Judge David Briones of the U.S. District Court for the Western District of Texas ruled in favor of El Paso County, Texas, and Border Network for Human Rights, which had argued Trump’s national emergency declaration using billions in Pentagon funds for the wall was an overreach.

The plaintiffs also accused the White House of using the funds for a situation that did not meet the bar for an “emergency” under the National Emergencies Act.

"The President's emergency proclamation was a blatant attempt to grab power from Congress. Today's order affirms that the President is not a king and that our courts are willing to check him when he oversteps his bounds," Kristy Parker, counsel for Protect Democracy, a nonpartisan nonprofit which represented the plaintiffs, said in a statement.

Briones, a Clinton appointee, had previously ruled the county could bring the case because they had suffered reputational harm as a result of the funds diversion.

“After due consideration, the Court is of the opinion that a declaratory judgment and permanent injunction shall be granted in Plaintiffs’ favor,” he wrote in the Tuesday ruling.

Senate Minority Leader Charles Schumer (D-N.Y.) said the ruling "confirms the president’s national emergency declaration to steal funds from military families to build a wall he promised Mexico would pay for was, and is, an outrageous power grab by a president who refuses to respect the constitutional separation of powers."

"This injunction is a win for the rule of law and should serve as a warning to Republicans in Congress and the Trump administration that the power of the purse - given exclusively to Congress by the Constitution - cannot be usurped," he added in a statement.

Briones’s ruling does not apply to other funds that have been designated for wall construction, including counter-drug and Treasury Forfeiture funds. He wrote in his ruling that the court will rule on how broad the injunction could be after hearing additional briefing on the issue.