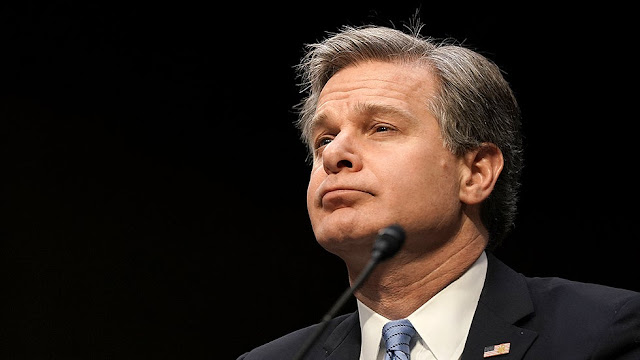 FBI Director Christopher Wray said Monday that the bureau is implementing more than 40 "corrective steps" in response to a Department of Justice inspector general report on the investigation into the Trump campaign and 2016 election interference.

The report found the FBI's decision to launch and carry out the investigation targeting four Trump campaign officials was not affected by political bias, a conclusion Wray highlighted while also noting the bureau fully cooperated with the nearly two-year internal review by Inspector General Michael Horowitz.

The report was, however, critical of certain aspects of the FBI’s handling of the investigation.

"Accordingly, the FBI accepts the Report's findings and embraces the need for thoughtful, meaningful remedial action," Wray said in a response included in the nearly 500-page report.

"Because our credibility and brand are central to fulfilling our mission, we are also making improvements beyond those recommended by the OIG," Wray added.

The director highlighted a few key changes, including to how the bureau uses the Foreign Intelligence Surveillance Act (FISA) to apply for surveillance applications. Horowitz found the FBI failed to meet "the basic obligation" that its FISA application for former Trump campaign aide Carter Page was "scrupulously accurate."

The bureau is also making "significant changes" to its Confidential Human Source (CHS) Program to improve how it collects, documents and shares information about those sources.

Other notable changes Wray detailed in response to the report include requiring approval from top FBI officials to conduct sensitive investigations out of bureau headquarters, establishing new protocols for the FBI's involvement in counterintelligence transition briefings, and mandating specialized training for FBI personnel who use FISA and CHS systems.

Wray also said the FBI will review the conduct of individuals singled out in the report for their actions and discipline them when necessary.

President Trump and his allies have long claimed that the FBI acted improperly and was biased against him in "spying" on his 2016 campaign.

The Horowitz report undercut that assertion, and further concluded that the FBI had “an authorized purpose” to launch its an investigation to “obtain information about, or to protect against, a national security threat or federal crime, even though the investigation also had the potential to impact constitutionally protected activity.”

But the inspector general was critical of the bureau's handling of its FISA application to monitor Page, something the president and his allies were quick to seize on.