Excused from school for political activism? 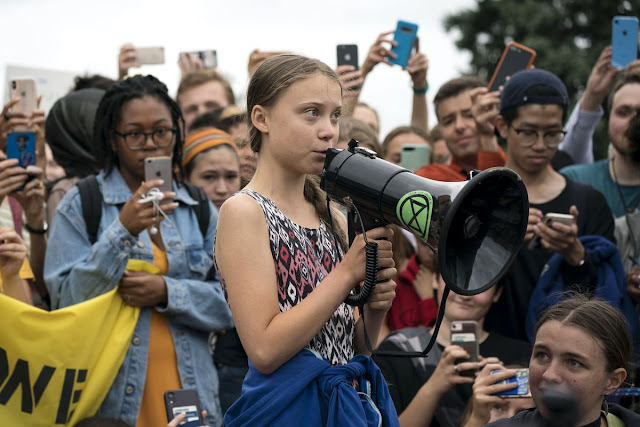 I’m not a fan of the decision by Fairfax County Public Schools to institute a new rule allowing middle-school and high-school students one excused absence per year for activism. But there’s likely a hidden motivation beyond the do-gooder comments being offered by administrators, and it’s not merely: “liberal teachers and administrators want to indoctrinate our kids.”

Now that the Parkland students and Greta Thunberg have achieved unprecedented prominence for child and teen activists, we can expect more children to be encouraged, recruited, or dragged into political activism — whether we like it or not. As many have noted, using teens and children as spokesmen for political causes turns them into a sword and shield; they can make wildly inaccurate comments and false accusations and avoid scrutiny, and any pushback against their statements is construed as “attacking a child.”

Thus, it’s likely that in the coming year or years, we will see more events on the National Mall in Washington, like a Global March for Climate Migrant Acceptance or Abortion Rights for Trans-Men or Gun Confiscation to Promote Veganism or whatever, scheduled during school days, with children and teens specifically encouraged to attend. Each time this happens, public school teachers and administrators will face the decision of whether or not to mark an unexcused absence for the kids who skipped school to protest. Few public schools want to get dragged into the social media maelstrom and turn into national click-bait, as a hundred websites regurgitate headlines like, “This Public School Punished Students for Marching in Support of Mandatory Intersectionality and Wealth Redistribution, And We Are Shook.” And this isn’t even getting into the potential for lawsuits.

Seeing what is coming down the pike, Fairfax County’s highly regarded public-school system now has this blanket policy that they hope will prevent controversy — one excused absence for year, no matter the cause, rally, or event. Conservative parents like myself might as well utilize the policy. (There’s that viewpoint neutrality in the law that our old friend David French salutes and Sohrab Ahmari finds particularly bothersome.) Students can attend right-of-center rallies, protests, and events, so if Fairfax parents want to encourage their kids to attend one of CPAC’s weekday events, they can do that. (I won’t be doing it; my boys would be bored out of their minds, and I don’t want them having to make up schoolwork.)

But the adoption of the rule also represents a fundamental surrender on the part of educators. There was a time, not so long ago, that teachers and school administrators would feel comfortable telling political activists of any stripe: “we know you believe that your cause is important; that’s how we feel about educating children. If you want middle-schoolers and high-schoolers to attend your event, please schedule it for after school, on a weekend, or during one of the multiple ‘teacher workdays’ during the year when students are not attending school. We believe that during school hours, children and teens belong in the classroom. This is why we spend money and have staff enforcing truancy.” Fairfax County Public School administrators are now afraid to make that argument. If they do so, they will be denounced by the activist class as insufficiently “woke,” progressive, or aligned with the popular causes of the day. The administrators are afraid to be authority figures, making a decision based upon the best interests of the children in their school system.