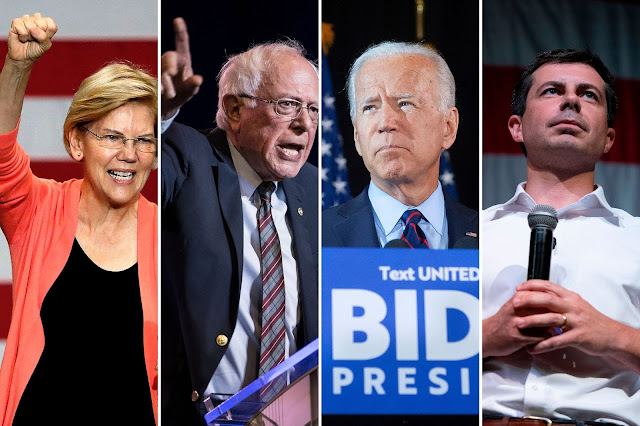 Democrats are bracing for a long, drawn-out primary season.

With just six weeks until the Iowa caucuses, some Democrats say they don’t expect a likely nominee to emerge anytime soon after early-voting states hold their contests. Instead, they’re preparing for a bruising four-way match-up that could drag on for months as candidates compete for the chance to challenge President Trump.

“It’s going to be uglier than ugly,” one Democratic strategist said, pointing to surveys showing there is no clear winner across the first four states in the nominating process. “It’s going to be a bloody slugfest. And the thing a lot of us fear is that Trump will benefit from all of it.”

Democrats have focused their efforts on electability, making the case for rallying behind the kind of candidate who can topple Trump. Some Democrats say that while a progressive candidate can energize the party’s base and win in the primary, it would be much more difficult for that same White House hopeful to win the general election against Trump.

Julian Zelizer, a professor of history and public affairs at Princeton University, argued that because the top candidates each have strong pockets of support, the primary may even lead to a brokered convention in July.

“Although people always say that, this time it could be true," Zelizer said. “Democrats are so desperate to defeat Trump they have very different visions of how to do this and won’t concede easily.”

“It shouldn’t be a surprise you are seeing two progressives and two moderates vying for the top spot,” he said, adding that former New York City Mayor Michael Bloomberg is also a wild card in the primary race. “What is the most interesting factor here is that voters are somewhat interchangeable between Biden and Sanders, as they are between Mayor Pete and Sen. Warren.”

“I’d argue it is still a jump ball in every way, and that makes the race to be the Democratic nominee extremely exciting,” Trujillo added.

While the overall field of candidates has shrunk in recent months, it has also seen some late additions, with Bloomberg and former Massachusetts Gov. Deval Patrick (D) entering the race, worried Democrats were ill-equipped to defeat Trump.

Voters are also divided, resulting in a race with no clear favorite when considering the early nominating states.

“There’s still a decent amount of time left that one or two people could start consolidating support and narrow it down to a two-person race,” said Democratic strategist Eddie Vale. “But given the amount of uncertainty voters have right now about being definitely settled on their first choice and different strengths these top four have in different early states, I think it’s as likely we go to a brokered convention.”

One factor contributing to a longer-than-usual primary season, Zelizer said, is the “strong and organized” Sanders-Warren constituency that “won’t disappear.”

Even though Biden leads in national polls, surveys are showing other candidates performing stronger in early states.

In Iowa, for example, Buttigieg has become the top contender in some polls. The RealClearPolitics average of state polls puts him in the lead with the support of 22 percent of people polled.

Sanders ranks higher than the other candidates in New Hampshire, at 19 percent support, according to the RealClearPolitics average, and Biden has strong leads in Nevada and South Carolina.

The Democratic strategist who predicted the primary would be a “bloody slugfest” said this election cycle is reminiscent of 2016, when former Secretary of State Hillary Clinton and Sanders were locked in a bitter battle for the Democratic nomination. Clinton emerged the winner, but “she was damaged from the primary,” the strategist said.

“And anyone who says Sanders didn’t hurt her has their head in the clouds,” the strategist said. This time around, a brokered convention “could only add further division at a time when we need [unity] most. It’s a bit of a nightmare situation.”