Dems in no hurry to send impeachment articles to Senate 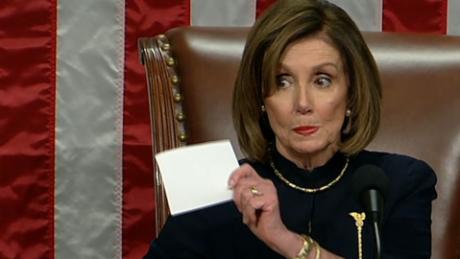 Just moments after the House impeached President Trump, Speaker Nancy Pelosi (D-Calif.) declined to say when — or even if — Democrats will deliver the articles to the Senate.

"We'll make that decision as a group, as we always have, as we go along," Pelosi told reporters in the Capitol.

Despite repeated attempts by reporters to press her on timing, Pelosi declined to commit to sending the two articles of impeachment — abuse of power and obstruction of Congress — across the Capitol, essentially putting the process in limbo as it looms unfinished over the Senate and White House.

Pelosi and her fellow Democrats have been skeptical that the GOP-controlled Senate will conduct a fair and impartial trial, especially after Majority Leader Mitch McConnell (R-Ky.) — who would essentially serve as jury foreman in the trial — conceded that it would not.

“I’m not impartial about this at all,” he told reporters Tuesday.

Seemingly alluding to those comments, Pelosi cited a need to "see what the process is on the Senate side" before making any decisions about the timing of delivery or the naming of impeachment managers to prosecute the case.

“And I would hope that that would be soon,” the Speaker said, adding that the delivery would not be “tonight.”

“So far we haven’t seen anything that looks fair to us,” she added.

Earlier in the week, Majority Leader Steny Hoyer (D-Md.) said Democrats would likely not turn over the articles to the Senate immediately; however, he also dismissed the idea that the delay would be extensive.

"I don't think that that's the path we'll follow. But that does not mean that we will immediately deliver," Hoyer said. "There are considerations related to other legislation. As I understand the rules of the Senate, once they receive the articles, they have to act. They have to go into trial. They can't do any other work."

Still, the threat of delay did not appear to raise much concern among Republicans.

“Folks, this might be the greatest compliment McConnell has ever received,” tweeted Josh Holmes, a GOP strategist who serves as an outside adviser to McConnell. “They are seriously entertaining holding a grenade with the pin pulled rather than facing what happens when they send it over McConnell’s wall.”

The idea of delaying sending the two impeachment articles to the Senate first surfaced last week in conversations among Democrats, but it picked up steam in the lead-up to Wednesday’s House floor vote on the articles.

Harvard Law School Professor Laurence Tribe further propelled the idea forward in a Washington Post op-ed in which he argued that delaying the delivery of the articles would give Senate Minority Leader Charles Schumer (D-N.Y.) more leverage when negotiating with McConnell over the rules of the impeachment trial.

The key lingering question is whether McConnell and Senate Republicans will cede to Democrats' requests to call witnesses, including acting White House chief of staff Mick Mulvaney and former national security adviser John Bolton, to testify before the upper chamber, which Democrats say will be key in order to have a fair trial.

Senate Republicans, meanwhile, are hammering the idea that the articles would sit idle in the lower chamber. Sen. John Cornyn (R-Texas) on Wednesday called that strategy "one of the dumbest things I've ever heard of."

"Are they threatening to withhold the articles of impeachment?" Cornyn said. "That doesn't accomplish their intended goal. That just means we won't be having a trial."

Prior to Pelosi’s press conference Wednesday night, some Republicans had described the possible delay as a sign that Democrats are growing more partisan in the process by leaving the door open on impeachment heading into a crucial election year rather than expeditiously bringing the process to a close, as they had pledged throughout the process.

Still, when asked repeatedly what Pelosi would consider a "fair trial," she declined to say, while defending the Democrats' impeachment process from GOP allegations of unfairness.

"We had a very fair process in the House of Representatives," she stated. "We have legislation, approved by the Rules Committee, that will enable us to decide how we will send over the articles of impeachment."