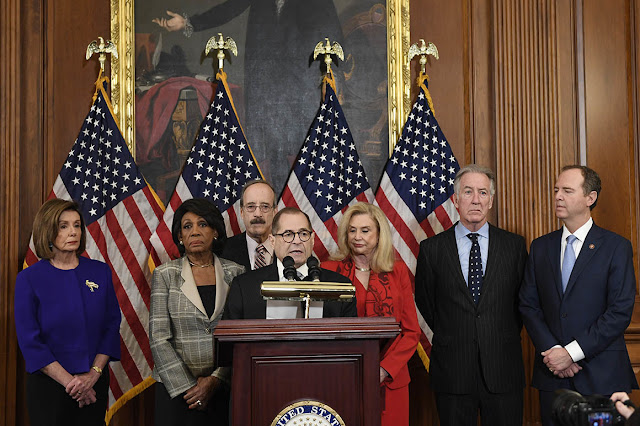 House Democrats on Tuesday unveiled two articles of impeachment against President Trump, accusing him of abusing his office for personal political gain and all but guaranteeing he becomes just the third president in the nation's history to be impeached.

The historic move, which follows weeks of closed-door and public hearings on Trump’s dealings with Ukraine, carries far-reaching implications for a fiercely divided country that’s split roughly in half on whether Trump should be removed from office and ensures that the impeachment debate will carry far into an election year.

Speaker Nancy Pelosi (D-Calif.), who had resisted impeachment for most of the year, struck a somber tone when announcing the articles in the Capitol, saying Trump’s handling of foreign policy in Kyiv had left Democrats no alternative.

“On this solemn day, I recall that the first order of business for members of Congress is the solemn act to take an oath to defend the Constitution,” she said in the august, wood-paneled Rayburn Room adjacent to the House chamber.

Democrats are bringing two charges against Trump, which they say rise to the level of high crimes and misdemeanors: that he abused the power of his office and that he obstructed Congress in its impeachment inquiry.

"It is an impeachable offense for a president to use the powers of his office to seek a personal benefit," House Judiciary Committee Chairman Jerrold Nadler (D-N.Y.) said in introducing the first article.

“And when he was caught, when the House investigated and opened an impeachment inquiry, President Trump engaged in unprecedented, categorical and indiscriminate defiance of the impeachment inquiry,” Nadler continued, pointing to the second article of obstruction of Congress.

The Judiciary chairman said his committee would vote on the articles later this week — likely Thursday, according to several sources — setting up a vote of the full House as early as next week, before Congress leaves Washington for the winter holidays. Forecasting a nasty battle to come, Trump quickly took to Twitter to attack Democrats’ decision.

Both of the charges are related to the unfolding controversy surrounding Trump's efforts to pressure Ukraine's government to conduct a pair of investigations that might have helped him politically: one into Trump's political rivals — including former Vice President Joe Biden — and another into the debunked theory that Ukraine, not Russia, meddled in the U.S. elections of 2016.

Leading up to the articles unveiling, a number of liberal lawmakers had advocated for the inclusion of some reference to former special counsel Robert Mueller’s investigation into Trump’s role in Moscow’s election interference, which uncovered 10 potential episodes of obstruction of justice.

But Democratic leaders settled on broader language to capture Mueller’s findings without making them a separate article, according to lawmakers familiar with the text.

Rep. Steve Cohen (D-Tenn.), chairman of the Judiciary Committee’s subpanel on the Constitution, said the language will make "a reference to a continuing pattern of behavior."

Democrats allege Trump withheld nearly $400 million in U.S. security aid to Ukraine and dangled a White House meeting with Ukraine's president to pressure the country’s president to publicly announce an investigation into Biden and his son Hunter, who worked on the board of the Ukrainian energy firm Burisma Holdings.

This, they warned, makes clear that Trump believes he is above the law, and will continue this pattern of misconduct if he remains in office.

“We stand here today because the president’s continuing abuse of his power has left us no choice,” said Rep. Adam Schiff (D-Calif.), chairman of the House Intelligence Committee, which led the weeks-long investigation into the Ukraine affair. “To do nothing would make ourselves complicit in the president’s abuse of his high office, the public trust and our national security.”

But Republicans, who have largely taken the hardline argument that Trump did nothing wrong, argued that Democrats have failed to provide the evidence to back up their case. Even if he did pressure Ukraine, they say – while noting that he didn’t – it wouldn’t be an impeachable offense.

They argue this is a “sham” impeachment inquiry designed by Democrats to remove a president they cannot defeat at the ballot box.

Trump also mounted his own defense, taking to Twitter shortly after the press conference concluded. He denied any claims that he pressured Ukrainian President Volodymyr Zelensky, blasted the hearing as a “WITCH HUNT” and attacked Schiff as “a totally corrupt politician” who he said will “eventually have to answer for this!”

“Both the President & Foreign Minister of Ukraine said, many times, that there 'WAS NO PRESSURE.' Nadler and the Dems know this, but refuse to acknowledge!'" the president tweeted.

The articles were announced one day after a Democratic staff counsel, going over the evidence produced by Schiff’s Intelligence Committee, said Trump represented “a clear and present danger” to the nation's national security, and to fair and free elections.

The House could vote on Trump's impeachment by next week, and he would become just the third president to be impeached. This would set up a trial in the GOP-controlled Senate, where many expect Trump would be acquitted.

The move will have long lasting political implications, though the question of how remains yet to be seen.

Democrats described the move as a hard, but necessary – one they must make to protect the country from a lawless president.

“It is rather a question of duty,” Schiff said at the conclusion of the press conference. “The president’s oath of office appears to mean very little to him but the articles put forward today will give us a chance to show that we will defend the Constitution and that our oath means something to us.”