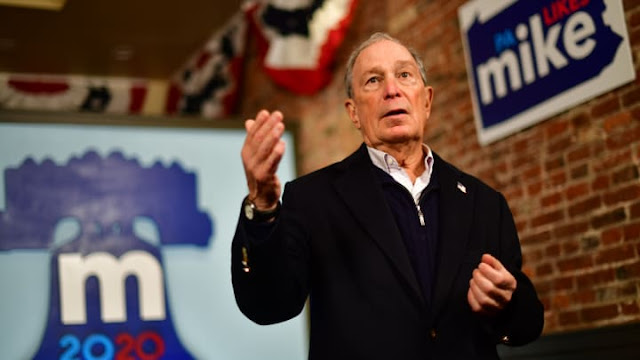 In one of the more surprising – and puzzling – stories of the 2020 Democratic primary race, we learned this week that New York billionaire Michael Bloomberg has been busy creating jobs long before he gets the chance to do so as president. As a bonus, the jobs were exclusively for women, making his efforts even more relevant in the current political landscape. Unfortunately for him, the press figured out that the jobs he was creating were for female prisoners in an Oklahoma lockup. Oops.

The former New York City mayor and Democratic presidential candidate used prison labor to make campaign calls. Through a third-party vendor, the Mike Bloomberg 2020 campaign contracted New Jersey-based call center company ProCom, which runs calls centers in New Jersey and Oklahoma. Two of the call centers in Oklahoma are operated out of state prisons. In at least one of the two prisons, incarcerated people were contracted to make calls on behalf of the Bloomberg campaign.

According to a source, who asked for anonymity for fear of retribution, people incarcerated at the Dr. Eddie Warrior Correctional Center, a minimum-security women’s prison with a capacity of more than 900, were making calls to California on behalf of Bloomberg. The people were required to end their calls by disclosing that the calls were paid for by the Bloomberg campaign. They did not disclose, however, that they were calling from behind bars.

To be fair to Bloomberg, it’s completely believable that the candidate had no idea that this was going on. His campaign shopped out the job of making campaign calls to a contractor who then awarded part of the work to ProCom. That’s the company that arranged for the Oklahoma prisoners to make the actual calls. Once he was informed that this was going on, Bloomberg terminated the contract in an obvious damage control effort.

But was this really a “scandal” and something that required the termination of the contract? Activists are describing this as a case of Bloomberg “exploiting prison labor” as if he’s some sort of plantation master wielding a whip. But the fact is that prisoners regularly get the opportunity to have jobs while behind bars, allowing them to earn a small amount of money to spend in the commissary or prison store. And many of those jobs are nothing to write home about, frequently involving janitorial work, laundry or kitchen duties. While I, fortunately, have no direct experience in prison work environments, I would imagine that getting paid to sit at a desk and make phone calls for a few hours would likely be one of the more sought after job assignments.

There are certainly questions to be answered about how much the prisoners are being paid, but it’s also highly unlikely that Bloomberg knew those details. ProCom says that they paid the prison the state minimum wage of $7.25 per hour for each worker. But the Dr. Eddie Warrior Correctional Center appears to have only paid the women either $20 or $27.09 per month. Then again, prisoners don’t really have that many expenses on the inside. How well such workers should be compensated is a debate for another day, however.

The real question is whether or not the Bloomberg campaign really did anything wrong here and if there was a need to apologize. Given the factors I mentioned above, it certainly doesn’t sound like it to me. If ProCom wasn’t employing them to make phone calls they could just as easily have been scrubbing toilets to earn money for some extra snacks. If anyone is “exploiting” those women, it’s the prison system itself, not Bloomberg.