Being homeless is not a crime 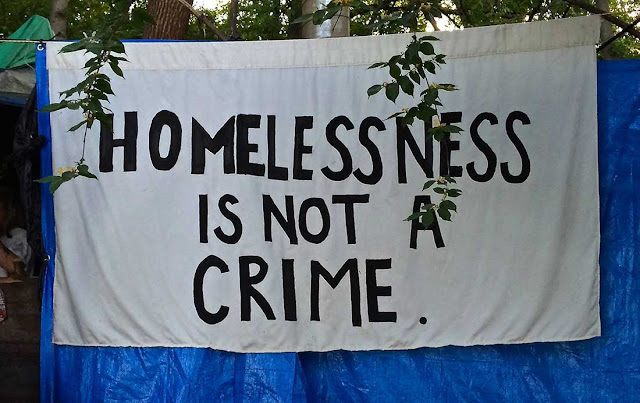 Local governments across the U.S. have been punishing people for being poor and not having a home. Is this not the definition of cruelty?

On Dec. 16, the U.S. Supreme Court signaled its agreement by refusing to consider a petition to overturn the Ninth Circuit’s Martin v. City of Boise ruling. The case’s central holding is: “An ordinance violates the Eighth Amendment insofar as it imposes criminal sanctions against homeless individuals for sleeping outdoors, on public property, when no alternative shelter is available to them.” In other words, fining or jailing a homeless person, because they have no place to stay, violates the U.S. Constitution’s ban on cruel and unusual punishment.

The moral clarity of this ruling seems obvious.

And yet, city, county and state governments across the country, along with business associations, chambers of commerce and law enforcement associations, filed amicus briefs asking the court to reverse the Martin decision and effectively empower governments to criminalize  homelessness. One Los Angeles County supervisor said, justifying filing such a brief, “[I]t’s critical we have access to every tool at our disposal to combat homelessness.”

Arresting or citing people living on the streets does not combat homelessness. Tearing down encampments where people are trying to survive does not help people overcome misery. It simply adds to that misery. The police, whose primary tools are tickets, arrests and force, are not an answer to poverty and homelessness.

Across the country, homeless people have been ticketed for offenses related to their unhoused status — offenses such as sleeping on the beach or sitting on the sidewalk. Tickets carry fines that can reach hundreds of dollars, more than people struggling to survive on Social Security or general relief payments, and even low-paying jobs, can possibly afford. Unpaid tickets lead to arrest warrants and time in jail.

Arrests lead to further suffering, lost liberty, exposure to violence and disease in jail, and loss of property such as clothing, medications, bedding, family photos and legal papers. Criminalization is deeply harmful to people living in the most precarious and vulnerable situations. Criminalization makes it harder for people to raise themselves off the streets. Criminalization may force people to move away from areas where enforcement is heavy, but it does not help them find a home.

I have interviewed people living on the streets. Every single one has a profoundly human and tragic story. One man was injured at work, lost his job and lost his home. A woman fled an abusive relationship and ended up on the streets. One woman had a mental health condition that prevents her from working. Another lost her job and home during the recession and has not been able to recover.

Most stories include an eviction at some point. They all occur in the context of the decline in affordable housing stock and the rapid rise in rents in our major cities.

Housing, including housing with services for people who have health conditions or other needs that require sustained care, is the most direct and effective answer to homelessness. A person with a secure place to live has a better chance of stabilizing their mental health or fighting an addiction; having a shower, clean clothes and a good night of sleep increases the chance of getting a job.

The constant cycle of arrests and fines does the opposite. Money spent on police, courts and jails as a response to homelessness takes away resources that government could direct to housing and services. Criminalization of homelessness is part of a larger pattern in this country of turning to law enforcement to solve societal problems, such as substance abuse, mental illness and poverty — a pattern that has made the U.S. a leader in incarceration while only exacerbating those problems.

The Supreme Court’s refusal to overturn Martin is a positive development. Though a limited ruling, it may press governments to consider responses to homelessness that do not include criminal enforcement. However, many elected officials continue to see homelessness as a policing problem, evidenced by local proposals to put unhoused people in internment camps and the Trump administration’s approach that emphasizes “more stringent enforcement” of restrictions on camping and “loitering” instead of expanded housing subsidies.