Whatever 'this' is, it's not Nixonian: At least not yet 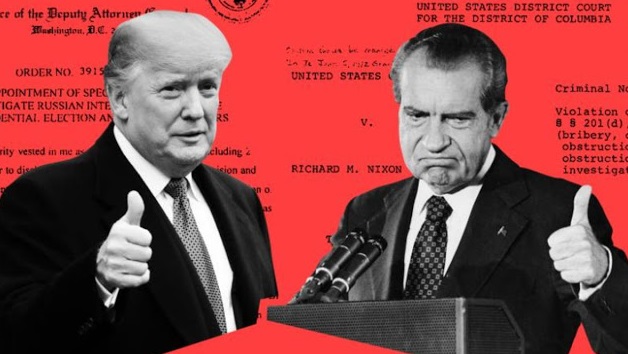 “This is beyond anything Nixon did.” Those words declared by Democratic House Intelligence Committee Chairman Adam Schiff capture the vast constitutional challenge for the House Judiciary Committee as it heads toward its announced hearing on the impeachment of President Trump. There is still disagreement, to use a Clintonian twist, of what “this” is.

Yet whatever “this” is, it is not Nixonian, at least not yet. Schiff seems to struggle to reduce the harsh allegations against Richard Nixon in order to elevate those against Donald Trump. Schiff explained that Watergate was merely “a third rate burglary of the Democratic headquarters” while now “what we are talking about here is the withholding of recognition in that White House meeting” of the Ukrainian president and of “the withholding of military aid to an ally at war. This is beyond anything Nixon did.”

Schiff is not alone. Neal Katyal, who served in the Justice Department under President Obama, said that the Ukraine allegations are “in many ways even worse” than the alleged obstruction by President Nixon of his impeachment investigation. Katyal added that it is now “all there” in the record. (His analysis is undeniably consistent as he previously declared that the obstruction case against Trump in the Russia investigation was “devastating” and that there was an easy “roadmap” for the charges.)

The Nixon impeachment began with a felony crime with the Watergate burglary, then swept to encompass an array of other crimes involving political slush funds, payments of hush money, maintenance of an enemies list, directing tax audits of critics, witness intimidation, multiple instances of perjury, and even an alleged kidnapping. In the end, there were nearly 70 officials charged and four dozen of them found guilty. Nixon was also named as an unindicted conspirator by a grand jury.

However, according to Schiff and Katyal, all those federal crimes appear to pale in comparison to the Ukraine controversy. Katyal said on air that Trump has denied Congress the testimony of former national security adviser John Bolton and “a whole bunch of other people.” This on its face, Katyal claimed, constitutes “unprecedented obstruction, in many ways even worse than President Nixon during Watergate. They have gagged every single executive branch employee from going and testifying.”

But that is not exactly unprecedented. Take the Obama administration position, for instance, on the investigation of “Fast and Furious,” which was a moronic gunwalking operation in which the government arranged for the illegal sale of powerful weapons to drug cartels in order to track their movement. One such weapon was used to murder Border Patrol agent Brian Terry, and Congress began a justified oversight investigation. Some members called for impeachment proceedings. But Obama invoked executive privilege and barred essential testimony and documents. The Obama administration then ran out the clock in the judiciary, despite a legal rejection of its untenable and extreme claim by a federal court.

During its litigation, the Obama administration argued that the courts had no authority over its denial of such witnesses and evidence to Congress. Judge Amy Berman Jackson, who has tried Trump associate Roger Stone, ruled that “endorsing the proposition that the executive may assert an unreviewable right to withhold materials from the legislature would offend the Constitution more than undertaking to resolve the specific dispute that has been presented here. After all, the Constitution contemplates not only a separation, but a balance, of powers.” Katyal is likely familiar with this precedent. He was acting solicitor general of the Justice Department at the start of “Fast and Furious” and during the resulting controversy.

Presidents have often gone to court to litigate conflicts over Congress calling top White House officials whose conversations are ordinarily protected by executive privilege. George Bush, Bill Clinton, and Barack Obama all barred evidence on that ground, and presidents are entitled to receive judicial review in conflicts between the legislative and executive branches. In the Obama litigation over the blocking of evidence, Jackson reaffirmed that such judicial review is part of the constitutional system of allowing courts to “determine whether another branch has exceeded its power.” Citing two Supreme Court rulings, Jackson added that it would “elevate and fortify” one branch to dictate the results in such conflicts.

Putting the “unprecedented” claim aside, it is not true that the Trump administration “gagged every single executive branch employee from going and testifying.” Yes, the Trump administration did tell executive officials not to testify, and I have disagreed with that position, as well as the underlying claims of privilege and immunities. However, several officials have testified despite the White House position. This includes many core witnesses in the impeachment hearings, like National Security Council Director of European Affairs Alexander Vindman, Ambassador William Taylor, Ambassador Gordon Sondland, Deputy Assistant Secretary of State George Kent, Acting Assistant Secretary of State Philip Reeker, Under Secretary of State David Hale, Deputy Associate Director of the Office of Management and Budget Mark Sandy, and Foreign Service Officer David Holmes. All remain in federal service in good standing.

The case for impeachment could be greatly enhanced by the witnesses not subpoenaed by the House. Democrats burned two months during which they could have subpoenaed and litigated access to Bolton as well as Trump attorney Rudy Giuliani, Vice President Mike Pence, Secretary of State Mike Pompeo, and others. Schiff has simply said that he refuses to be tied up in the courts. However, a lower court decision that former White House counsel Don McGahn should testify on the Russian matters shows that the courts are indeed ready to issue such orders.

With impeachment, such review can be expedited. Yet Democrats chose not to go to court even though the refusal of an order would be a clear obstruction case if not stayed by a higher court. It is difficult to see the “devastating” aspect of such an incomplete record against Trump it as exists today, let alone the claim that Trump has “outnixoned” Nixon. That is why, whatever “this” is, in the words of Schiff, it is not Watergate. That does not mean it is not impeachable, but the House will have to build its case to that level, not lower historical impeachments to “this” level.