Warren just made things worse concerning her Medicare for All plan 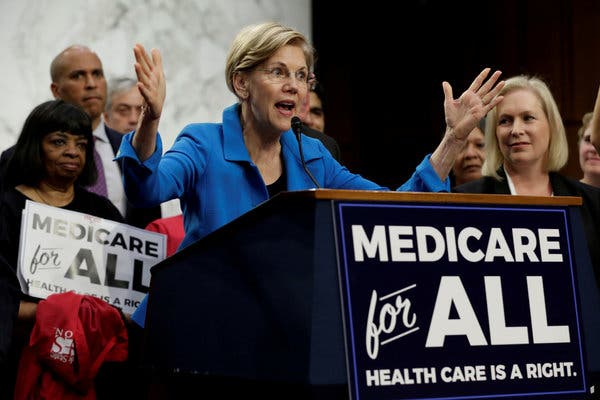 The New York Times reports on an update to Elizabeth Warren’s Medicare for All plan, and I think it just makes her initial mistakes worse.

After the media started treating her like a frontrunner in waiting, Warren has seen some slippage in the polls. She had a bad debate performance, and released the details, including the tax raises, that would be part of her Medicare for All plan. The consensus is that the tax raises are draconian, likely to have major negative consequences on the economy, very liked to be vulnerable to Supreme Court challenge on grounds of constitutionality, rely on fanciful revenue-boosting scenarios, and still don’t quite pay for a national health system.

It’s very likely that this plan, and the political fallout from it, is what’s driving people like Deval Patrick, and Michael Bloomberg to consider getting into the race. There seems to be no chance of passing such a plan unless the Senate moved magically and dramatically to the left in the 2020 elections. In other words, talking about her plan has been all downside for Warren.

Warren has compounded this political error today by announcing her political strategy for implementing her plan. Namely, she’s not going to pass it. Or rather, she intends to see one major health-care overhaul passed in her first 100 days. Then, after the 2020 mid-terms, she will pass an even more disruptive phase two to get to her desired Medicare for All endgame.

First, this is utterly fanciful. Obama nearly extinguished his first term presidency in the effort to pass Obamacare. The initial wave of health-care policy revisions and subsequent policy-cancellation letters brought about the Tea Party Congress of 2010. Another wave of health-care disruption is highly unlikely to be beneficial to the party that initiates it.

You could argue that Warren’s political strategy is a way of demonstrating how she would triage the issue, while punting the most nettlesome questions to the unlikely hypothetical time when her administration gains political momentum after 2020. But I think the political effect is going to be to demoralize her left wing supporters who want her to commit to Medicare For All as her top priority. They want her to commit her post-victory political capital to this issue. She’s hedging. So she’s confirming to the social-democratic left that she’s not quite committed to their priorities, even as she leaves herself open to attack from the Republicans and the more moderate wing of her party that she’s too ambitious on this issue.

Honestly, it makes me wonder if there is an element of self-sabotage at work. I expect a second look at Bernie Sanders from the left.