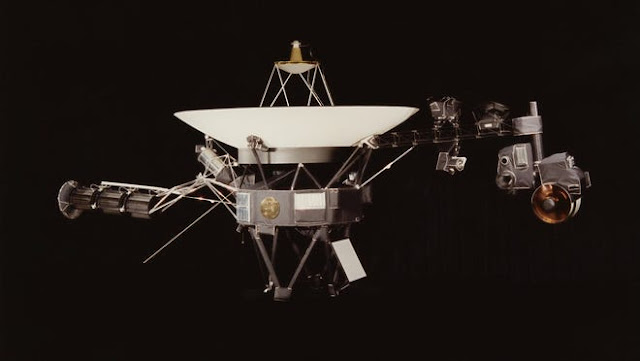 One year ago, on Nov. 5, 2018, NASA's Voyager 2 became only the second spacecraft in history to reach interstellar space, the region between the stars.

The findings help paint a picture of the "cosmic shoreline" where the environment created by our sun ends and the vast ocean of interstellar space begins.

"The Voyager probes are showing us how our sun interacts with the stuff that fills most of the space between stars in the Milky Way galaxy," said Ed Stone, project scientist for Voyager and a professor of physics at Caltech.

The studies say Voyager 2 has left the heliosphere – the protective bubble of particles and magnetic fields created by our sun. At a distance of about 11 billion miles from Earth, Voyager 2 is well beyond the orbit of Pluto.

The heliosphere can be thought of as a cosmic weather front – a distinct boundary where charged particles rushing outward from the sun at supersonic speed meet a cooler, interstellar wind blowing in from supernovae that exploded millions of years ago, according to the Guardian.

"In a historical sense, the old idea that the solar wind will just be gradually whittled away as you go further into interstellar space is simply not true," said the University of Iowa's Don Gurnett, corresponding author on one of the studies. "We show with Voyager 2 – and previously with Voyager 1 – that there's a distinct boundary out there."

Voyager 2 is only the second spacecraft to travel this far out into the solar system. The craft was launched slightly ahead of its twin, Voyager 1, in 1977 and has been traveling through space for the past 42 years.

“We certainly didn’t know that a spacecraft could live long enough to leave the bubble and enter interstellar space,” Stone said at a media teleconference to announce the findings. “We had no good quantitative idea of how big this bubble is."

Even though the spacecraft are out of the sun’s bubble, the Voyagers are still technically in our solar system, NASA said. Scientists maintain that the solar system stretches to the outer edge of the so-called Oort Cloud. It will take about 30,000 years for the spacecraft to get that far.