Universities have a legal obligation to enforce rules even-handedly 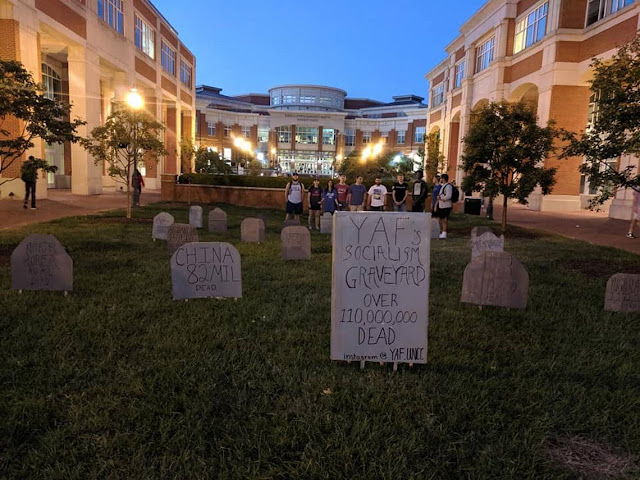 University administrators ought to enforce rules even-handedly, not concerning themselves with the political content of the infraction. Moreover, public universities have a legal obligation to do so. Nevertheless, administrators are prone to letting their personal views interfere with fairness, as a recent incident at the University of North Carolina — Charlotte shows.

Emma Schambach, a student who founded the YAF chapter at UNCC, spoke about her experience. The YAF group had set up a display that made the case against socialism, specifically its history of killing people.

Schambach states, “To publicly oppose socialism and show other students they weren’t alone in preferring capitalism, our club created a display of 21 cardboard tombstones, each representing a country with the number of lives lost in that country due to socialist ideologies. We spent a Wednesday afternoon creating the display, drawing, cutting, painting, and writing the statistics on each stone. This process took us over four hours, but we happily worked, knowing we were going to be educating our peers on an incredibly important issue.”

Naturally, some leftist students took umbrage. The YAF students were hurting their feelings by pointing out an inconvenient fact about socialist regimes!

The following day, the YAF display was gone. Did some school official have it removed? Or did “woke” students do it? When they complained, the YAF students discovered that university officials wouldn’t be bothered to investigate the matter.

Schambach concludes, “This failure to identify or reprimand the vandal sets a dangerous precedent: It may indicate that the university, though not officially stifling free speech, will allow students to compromise the free speech of others. Our display can be replaced, but a weak response to protecting free speech can have a chilling effect on unpopular opinions—whether of the political left or the political right.”

If some leftist display had been stolen or destroyed, I suspect that school officials would have been relentless in trying to track down the person or persons responsible.