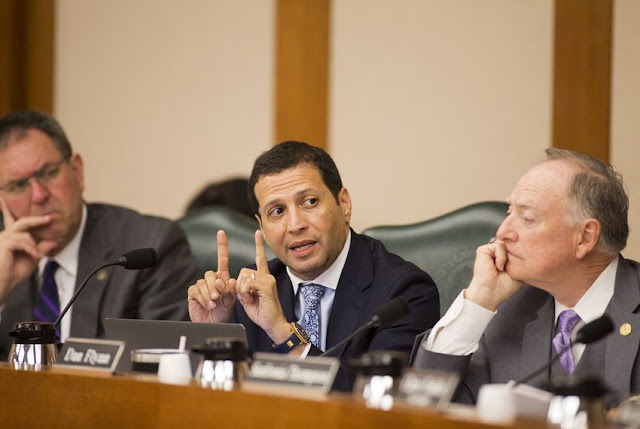 Who would have guessed that sharing political confidences with a political foe — a conversation that upended the speaker of the Texas House — would have real competition for the biggest blunder a House member might make this year?

The newest contender became public Wednesday: Dropping an envelope containing four packets of cocaine at an Austin airport is clearly a dumbfounding mistake. But the frosting on that particular cake was on the outside of said envelope — which bore the official letterhead of state Rep. Poncho Nevárez, D-Eagle Pass.

When that became public, Nevárez said that “the news is true” in a statement and said it is the reason he decided not to seek reelection.

“I do not have anyone to blame but myself,” he said. “I accept this because it is true, and it will help me get better.”

He added that “grief and addiction were consuming me” and noted that he plans to seek treatment.

The timeline raises some questions. Nevárez was seen on surveillance cameras dropping the envelope as he got into an SUV after arriving on a private plane — in September. For reasons that aren’t completely clear, the Texas Department of Public Safety kept a lid on the news for more than two months.

The state police filed an affidavit a little more than two weeks ago seeking to test the package for the legislator’s DNA. They already know the bags inside contained about 2 grams of cocaine and that the name on the outside was Nevárez and that he says it was his. But DPS wants to know whether he was the person who licked the envelope.

On Thursday afternoon, a warrant for the legislator's arrest was issued; he faces a charge of third-degree felony possession of a controlled substance, which carries a maximum punishment of 10 years in prison.

Nevárez’s troubles don’t have anything to do with what sunk House Speaker Dennis Bonnen, R-Angleton — except that this is the world of state politics, and both the speaker and the chairman of the House Committee on Homeland Security and Public Safety played into the hands of groups agitating for a change in direction for Texas government.

Bonnen had a conversation in June with Michael Quinn Sullivan, a political activist who heads Empower Texans, a group that has antagonized establishment Republicans in Austin for years, and with state Rep. Dustin Burrows, R-Lubbock, who was then the head of the House Republican Caucus.

Sullivan, who surreptitiously recorded their meeting, walked out of it with an offer for House press credentials for his organization and a list of 10 House Republicans the elected officials said could be replaced with more conservative members. Sullivan played the recording for selected members and activists for weeks, finally releasing it to the public last month.

Burrows resigned as chairman of the GOP caucus along the way, and Bonnen — after five of his lieutenants visited to tell him they were withdrawing their support — said he won’t seek a second term in the job he won in January. He also said he won’t seek reelection to the House in 2020.

The first public peek at the Nevárez affidavit came from a similarly conservative activist group called Direct Action Texas (the Tribune confirmed the report Thursday) and inspired a storm of social media posts from Sullivan and others in that political circle.

For them, it didn’t matter much that Bonnen is a Republican and that Nevárez is a Democrat; both are from a class of Texas elected officials who didn’t deliver the kinds of results some conservatives wanted during this year’s legislative session.

Now the season has changed, from governance to elections. Candidates started filing for office Saturday and will continue through Dec. 9, and the high season of political fundraising and organizing is underway. Primaries are in March. Some of the people in charge are beset by chaos. It’s time for challengers to come forward.

And the timing of these scandals, for people set on rattling the legislative branch of state government, could hardly improve.