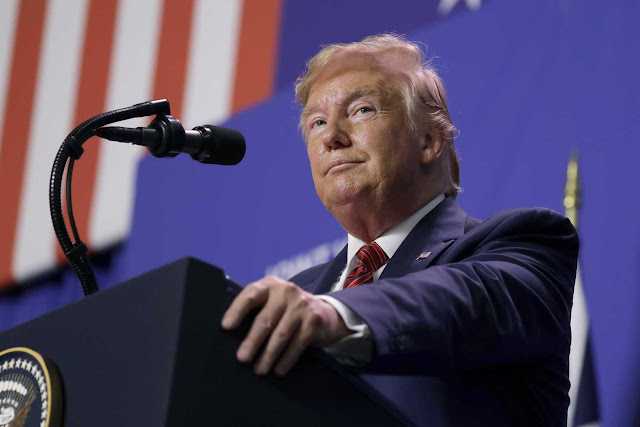 A push by President Trump and conservatives to dig in to Hunter Biden’s work in Ukraine is running into stumbling blocks from an unusual corner: congressional Republicans.

Some Republicans believe Trump’s impeachment trial or a separate Senate committee investigation could lay the groundwork for probing former Vice President Joe Biden and his son Hunter, who have both emerged as a fixation for Trump and his top allies as they look for a foothold in the impeachment battle.

Trump escalated the effort on Thursday when he tweeted that the Bidens “must testify”— raising the specter that the president’s lawyers or GOP senators could try to drag them into the public impeachment trial.

“What did Hunter Biden do for the money?” @SenJohnKennedy  A very good question. He and Sleepy Joe must testify!” Trump tweeted.

But a push to focus on the Bidens as part of an impeachment trial quickly received a cool reception from Republicans on Capitol Hill.

“His lawyers, I presume, can ask for any witnesses they want. But I think we ought to keep focus on the articles of impeachment and not go down any rabbit trails,” said Sen. John Cornyn (R-Texas) told The Hill.

Asked about Trump floating that the Bidens should testify, Senate Judiciary Committee Chairman Lindsey Graham (R-S.C.) said he didn’t understand it as a "defense to the president.”

“We’ll make that decision, not the president,” Graham added.

Sen. Ron Johnson (R-Wis.), pressed about Hunter Biden being called to testify, replied: “I’m not sure what he would add.”

Trump’s public call for the Bidens to testify comes after days of chatter within the Senate Republican caucus about trying to use an impeachment trial or a potential separate Senate committee investigation to look into the Bidens.

Kennedy questioned how a Senate trial could examine whether Trump used Ukraine aid to try to pressure the country into investigating the Bidens without having Hunter Biden testify.

He added that he would be “very surprised” if Trump’s lawyers didn’t try to call Hunter Biden or hadn’t at least considered trying to call him.

Sen. David Perdue (R-Ga.) added that he would “love” to use an impeachment trial to get the Bidens to testify. Meanwhile, Sen. Kevin Cramer (R-N.D.) said that it would be “preferable” for Hunter Biden to testify as part of a separate committee, “it seems difficult to avoid bringing him to testify.”

Sen. Rand Paul (R-Ky.) warned that he might vote against a resolution on impeachment trial rules if it limited the ability for Trump’s team to call witnesses.

"I'm all in favor of the president calling Joe Biden, Hunter Biden and the whistleblower,” Paul said. “I'd advise Republicans not to participate in anything that doesn't allow defense witnesses.”

Trump and his allies have latched onto Biden’s connection to Ukraine as the former vice president seeks the Democratic nomination to challenge Trump in 2020.

Hunter Biden worked on the board of a natural gas company owned by a Ukrainian oligarch while his father served as vice president. Joe Biden pushed in 2016 for the dismissal of a Ukrainian prosecutor who had been accused of overlooking corruption in his own office, threatening to withhold money if the prosecutor was not fired.

Other GOP senators poured cold water on talk of calling the Bidens, arguing it was “premature” to talk about impeachment trial witnesses when the House hasn’t yet passed articles of impeachment.

The House has been wading deeper into its impeachment inquiry, which is focused on Trump asking Ukraine to “look into” Biden and his son Hunter Biden. Lawmakers are also investigating if Trump held up aid to Ukraine unless the country opened an investigation.

Sen. Roy Blunt (R-Mo.), when asked about Trump’s tweet, added that he broadly thought the president and House Republicans should be allowed to ask that witnesses be called, while adding “we’re way ahead of ourselves on the Senate trial.”

Short of trying to have the Bidens testify as part of an impeachment trial, some GOP senators are urging Senate committee chairmen to launch an investigation, but those efforts are yielding mixed results.

Graham, the chairman of the Senate Judiciary Committee, initially invited Giuliani to testify before his panel about corruption in Ukraine, a move that would have provided Giuliani a venue for publicly laying out his allegations against the Bidens.

But Graham said he doubted he would be able to get Giuliani to testify and is instead urging the Senate Foreign Relations Committee to probe ties between Ukraine and Biden, including calling in State Department officials.

“Did Joe Biden inappropriately ask the Ukarnian prosecutor to be fired because he was investigating a company that his son was on board of? ...I think the Foreign Relations Committee would be the ones to engage in that,” Graham said.

But Foreign Relations Committee Chairman Jim Risch (R-Idaho) has put any Ukraine-related hearings on hold until after the House impeachment inquiry wraps up.

Asked about Graham’s request, he pointed to a letter he sent in a late October to Sen. Robert Menendez (N.J.), the top Democrat on the panel, noting that the Ukraine issue was “deeply intertwined” with the House inquiry.

“Due to the ongoing House impeachment inquiry, I believe it would be more appropriate for our committee to wait on examining these matters until after the House completes its process (one way or another)," he wrote. "At the appropriate time, we will look into these matters in greater detail in consultation with the Senate Select Committee on Intelligence.”

Kennedy, a member of Graham’s panel, was skeptical that Hunter Biden would be called before a Senate panel, saying, “I doubt that will happen.”

Sen. Thom Tillis (R-N.C.) said there were “legitimate questions” about Hunter Biden’s employment at Burisma but “whether or not that rises to a level of a Senate venue for doing it, I’m not really sure.”

The most likely panel, at the moment, to dig into the Bidens is Johnson’s oversight committee. Johnson and Sen. Chuck Grassley (R-Iowa), the chairman of the Finance Committee, sent a letter to Secretary of State Mike Pompeo on Wednesday asking the department to hand over any records tied to the Bidens or Burisma Holdings.

But Johnson stopped short of saying he would try to call Hunter Biden before his committee, noting he’s tried to avoid “show trials.”

“There’s an awful lot of questions that need to be answered,” he said. “I am just trying to tenaciously gather information.”