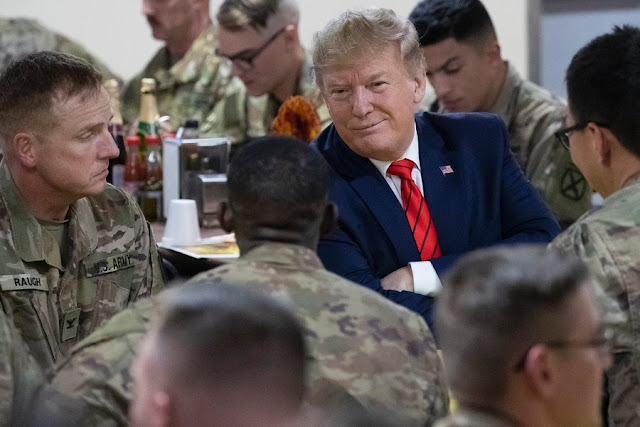 President Trump on Thursday made a surprise trip to Afghanistan, his first to the nation as president, to visit troops for the Thanksgiving holiday.

Trump held a meeting with Afghan President Ashraf Ghani, during which he announced that he has restarted peace talks with the Taliban, and that he’d like to reduce the number of U.S. troops in Afghanistan to 8,600, down from a current total of less than 14,000.

Trump arrived at Bagram Air Field, the largest U.S. base in Afghanistan, and was expected to be on the ground for roughly 2.5 hours. He served turkey to troops in a cafeteria, posed for photos and delivered brief remarks in a hanger.

“It’s a dangerous area and he wants to support the troops,” White House press secretary Stephanie Grisham said of Trump. “He and Mrs. Trump recognize that there’s a lot of people far away from their families during the holidays and we thought it’d be a nice surprise.

“It’s truly about Thanksgiving and supporting the troops.”

Trump said he believes the Taiban are ready for a cease-fire.

“The Taliban wants to make a deal — we’ll see if they make a deal. If they do they do, and if they don’t they don’t. That's fine,” Trump said during his meeting with Ghani.

Trump had said in September that talks with the Taliban were “dead” after an attack by the group killed 12 people, including a U.S. soldier.

“We were getting close — and we pulled back because of what they did,” Trump said Thursday. “It was not a good thing they did with killing the soldier.”

The Trump administration has been negotiating with the Taliban for roughly a year in an effort to end America’s longest war. The outlines of a deal are expected to involve a significant U.S. troop reduction in exchange for assurances from the Taliban that they would not allow terrorist groups to use Afghanistan as a launch point for attacks against the United States.

“Afghan security forces are taking the lead now,” Ghani said Thursday, adding his thanks to Americans who have made the “ultimate sacrifice” in Afghanistan.