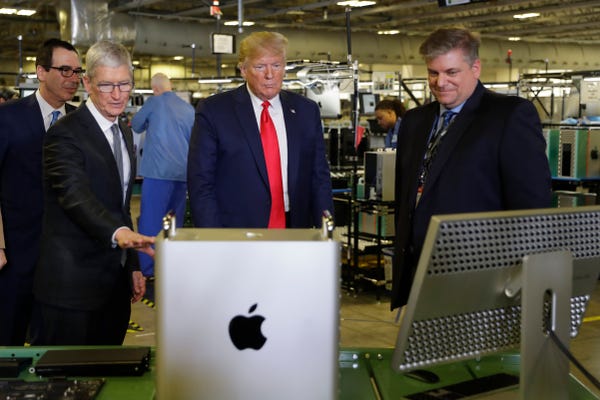 President Trump on Wednesday toured an Apple manufacturing plant in Texas with company CEO Tim Cook, where he demurred on the possibility of exempting the tech giant from tariffs, pointing to the need to sustain a balanced playing field.

"We’re looking at that, and the problem we have is you have Samsung — it’s a great company but it’s a competitor of Apple. And It’s not fair because we have a trade deal with Korea," Trump told reporters from the factory floor in Austin, flanked by Cook, Treasury Secretary Steven Mnuchin and senior White House adviser Ivanka Trump.

"But we have to treat Apple on a somewhat similar basis as we treat Samsung," the president added. "Now with all of that being said, we’re doing very nicely with China, but I like the way it is now."

Trump said in June that Apple would not be exempt from tariffs on products it makes in China, including components of its new Mac Pro computer.

But Cook has lobbied Trump in the months since to reconsider, citing an agreement that the U.S. has with South Korea-based Samsung to allow it to avoid tariffs.

The Trump administration is set to impose additional tariffs on China next month as trade talks between the two sides drag out. The president did not respond to a shouted question on Wednesday about whether he would delay that tranche of tariffs, and gave no indication he was close to signing a phase-one trade deal with China.

The president toured the Austin factory with Cook and his top aides, viewing the production process and touting it as a win that the company was basing more of its manufacturing in the U.S. At one point, Trump held up a component that had the words "Designed by Apple in California; Assembled in the USA" engraved on it.

Cook thanked Trump, his daughter and Mnuchin for coming to the site. The Apple CEO has sought to navigate the Trump presidency by voicing his concerns with certain administration's policies while working with it on economic initiatives.

Apple is expected to open a new campus in Austin in 2022, though the factory Trump and Cook toured on Tuesday opened several years ago.

Wednesday's visit to Texas came on a day that the news was dominated by a public impeachment hearing featuring U.S. Ambassador to the European Union Gordon Sondland.