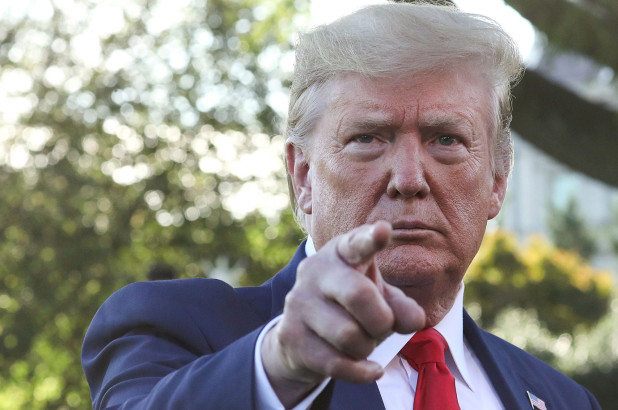 President Trump on Monday demanded that the anonymous whistleblower who raised an alarm about his contacts with Ukraine testify.

Trump said it was “not acceptable” for the whistleblower to answer written questions from Republican lawmakers in connection with the House impeachment inquiry, as his attorneys communicated was on the table on Sunday. And he claimed without evidence that the whistleblower gave “false information.”

“Written answers not acceptable! Where is the 2nd Whistleblower? He disappeared after I released the transcript. Does he even exist? Where is the informant? Con!”

Trump has long accused the whistleblower of providing a misleading account of his July 25 call with Ukrainian President Volodymyr Zelensky and highlighted that the complaint relied on second-hand accounts of other people.

According to a White House rough transcript of the call, Trump asked Zelensky to look into unsubstantiated allegations against former Vice President Joe Biden and his son Hunter’s business dealings in Ukraine.

The whistleblower, whose identity remains unknown and who is subject to protections under federal law, alleged that Trump was using his official position to solicit foreign interference in the 2020 presidential election, a claim that Trump has rejected. The complaint included details that matched up with the official transcript of the call.

Trump has raised questions about the whistleblower’s identity and reports about the individual’s possible ties to the Obama administration.

“There have been stories written about a certain individual, a male, and they say he’s the whistleblower,” Trump told reporters at the White House on Sunday. “If he's the whistleblower, he has no credibility because he’s a [John] Brennan guy, he’s a Susan Rice guy, he’s an Obama guy. And he hates Trump.”

He then suggested the individual’s identity should be revealed.

“Now, maybe it’s not him. But if it’s him, you guys ought to release the information,” Trump continued.

The whistleblower’s attorney, Mark Zaid, said Sunday that Republicans had been offered an opportunity to answer questions from the individual while continuing to protect the person, describing rhetoric from Trump and his GOP allies as an effort to “demand disclosure” of the person’s identity.

Zaid and attorney Andrew Bakaj have also said they represent a second whistleblower who filed a complaint about the Zelensky call to the intelligence community inspector general.

House investigators have heard testimony from a number of witnesses in connection with the impeachment inquiry, including one person, Lt. Col. Alexander Vindman, who was a firsthand witnesses to Trump’s July call with Ukraine.

Vindman, told lawmakers behind closed doors that he was so concerned about Trump raising an investigation into Biden and his son's business relationship with Ukrainian energy company Burisma Holdings that he reported it to the White House National Security Council’s (NSC) lawyer, according to a copy of his prepared remarks.

“I realized that if Ukraine pursued an investigation into the Bidens and Burisma, it would likely be interpreted as a partisan play which would undoubtedly result in Ukraine losing the bipartisan support it has thus far maintained. This would all undermine U.S. national security,” his remarks read.

Trump has accused Vindman, a Purple Heart recipient who is not a political appointee but was moved to the NSC last year, of being a "Never Trumper" and on Sunday said more information would soon be released about him.

Schiff said last month that the committee likely didn’t need the testimony of the whistleblower because Democrats already had a transcript of the call.

The White House has thus far refused to cooperate in the impeachment inquiry, accusing House Democrats of engaging in a "sham" and an unfair process meant to overturn the results of the 2016 election.