'Totally untrue': Trump pushes back on claim that he asked Barr to clear him on Ukraine 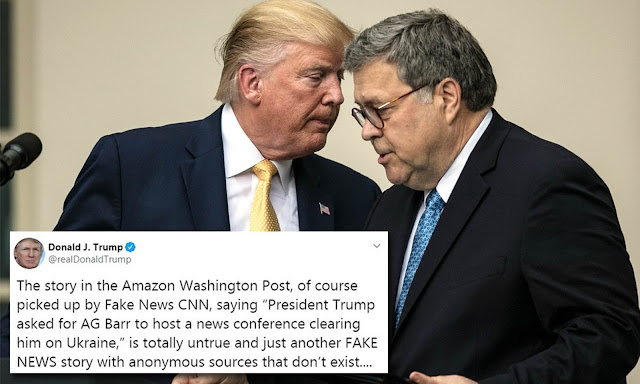 President Trump early Thursday pushed back on a report that he asked Attorney General William Barr to hold a news conference clearing him of wrongdoing in the Ukraine controversy that sparked an impeachment inquiry, calling the article “totally untrue.”

“The story in the Amazon Washington Post, of course picked up by Fake News CNN, saying ‘President Trump asked for AG Barr to host a news conference clearing him on Ukraine,’ is totally untrue and just another FAKE NEWS story with anonymous sources that don’t exist,” he tweeted.

In a fourth tweet hours later, he called the reporting a "Fake Washington Post con job with an 'anonymous' source that doesn’t exist."

"Just read the Transcript," he said, before arguing that "we don’t have freedom of the press!"

The Washington Post reported late Wednesday that Trump wanted Barr to state publicly that the president had broken no laws in his July 25 phone call with Ukrainian President Volodymyr Zelensky. The request came in late September, around the time when the White House released a partial transcript of the leaders' discussion, according to the newspaper.

Barr reportedly declined, though his Department of Justice (DOJ) did eventually release a statement claiming that a readout of the call — during which Trump pushed Zelensky to launch an investigation into former Vice President Joe Biden — did not contain any campaign finance violations.

Sources within the administration told the Post that Trump has brought up Barr's refusal to host a news conference regarding the controversy, although a senior official said that the episode has not caused any friction between the two.

"The DOJ did in fact release a statement about the call, and the claim that it resulted in tension because it wasn’t a news conference is completely false," the official said.

The Post noted in its report that it remains unclear why Barr elected not to hold a news conference. In April, the attorney general held a news conference ahead of the release of former special counsel Robert Mueller's report on his probe into Russian interference and possible obstruction of justice by Trump. He used the press briefing to lay out the principle findings of the report, such as Mueller's conclusion that there wasn't sufficient evidence of a conspiracy between the Trump campaign and Russia.

“As [Trump] said from the beginning,” Barr said. “There was in fact no collusion.”

“The Post fully stands behind its story and its reporters, who are among the finest journalists anywhere," Washington Post executive editor Marty Baron said in a statement on Thursday. "The president continues to make false accusations against news organizations and individual journalists. Despite his repugnant attempt to intimidate and harass The Post and its staff, we will continue to do the work that democracy demands of a free and independent press.”

House Democrats in September launched an impeachment inquiry centered around a government whistleblower complaint that accuses Trump of pushing Ukraine to investigate Biden, who is running for president, and his son Hunter Biden over unfounded allegations of corruption. The complaint is largely based on Trump's July 25 phone conversation with Zelensky.

A White House memorandum of the call confirms several aspects of the complaint, including Trump's request that Zelensky work with his personal attorney Rudy Giuliani and Barr to investigate the Biden family.

Multiple House committees have heard from numerous former and current administration officials as part of the investigation. Earlier this week, the House released a transcript of testimony from Gordon Sondland, the U.S. ambassador to the European Union, in which he acknowledged that Trump's dealings with Ukrainian officials amounted to a quid pro quo.

Trump has repeatedly dismissed allegations of wrongdoing, often describing his July 25 discussion with Zelensky as "perfect."