Things to know about the Sondland, Volker transcripts 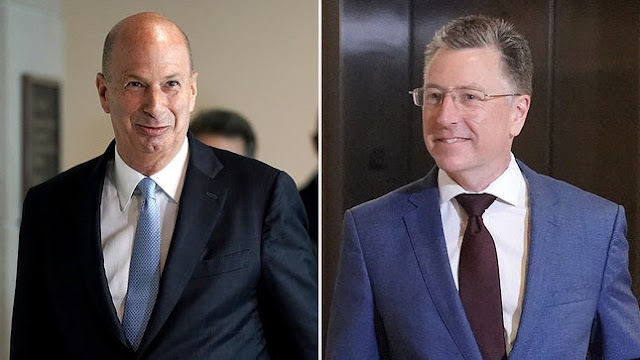 The transcripts also added to a growing body of evidence that military aid to Ukraine was made contingent on investigations being pushed by President Trump’s personal attorney Rudy Giuliani.

Here are five things to know about the hundreds of pages of testimony.

Both Volker and Sondland’s testimony makes clear that Giuliani was the point man for the president on Ukraine matters.

Volker told House lawmakers that the Ukrainians viewed Giuliani as a conduit to get information to the president.

Sondland said the president directed him and other administration officials to communicate with Giuliani about Ukraine issues, adding that he understood satisfying Giuliani’s concerns about Ukraine was a key to being able to implement policy there.

But there was at least one high-ranking official who was not fully on board with Giuliani’s role in the matter: Secretary of State Mike Pompeo.

“And Pompeo rolled his eyes and said: 'Yes, it's something we have to deal with,' ” Sondland said.

The transcripts come a day after one of Giuliani’s associates, Lev Parnas, indicated he is willing to cooperate in the impeachment inquiry.

Volker dismayed by Trump raising Biden on call with Zelensky

Volker said he was never aware of any interest by Trump in Burisma, a Ukrainian energy company, and that he only learned of Trump’s desire for investigations linked to former Vice President Joe Biden when he read the transcript of the president’s July 25 call with Ukrainian President Volodymyr Zelensky when it was released last month.

Volker also said he was troubled and surprised when he read the transcript, describing it as “unfortunate” for U.S. policy in Ukraine. Volker said it was easy to see how the call would become “explosive” in U.S. domestic politics.

“It creates a problem again where all of the things that we’re trying to do to advance the bilateral relationship, strengthen our support for Ukraine, strengthen the positioning against Russia is now getting sucked into a domestic political debate in the U.S., domestic political narrative that overshadows that,” Volker said.

“And I think that is extremely unfortunate for our policy with Ukraine,” he said.

Trump aides working to secure a statement from Zelensky at one point floated the possibility of having him do a television interview that would satisfy Trump’s desire to hear a statement on anti-corruption measures, according to Sondland.

Sondland told lawmakers that by early September the idea for a press statement had morphed into a possible television interview that would take place on a network “Trump would obviously see.”

The suggestion provided a moment of levity for at least some in the interview.

“Let the record reflect there's lots of laughing in the room,” one of the attorneys said, according to the transcript.

The release of the transcripts Tuesday provided seemingly explosive details about the Trump administration’s machinations with respect to security assistance to Ukraine.

One day before his testimony was released, Sondland revised his earlier statements and said he believed military aid to Ukraine was contingent on Kiev making a public statement about anti-corruption investigations sought by the Trump administration. Sondland, a Trump appointee, had previously said to House investigators that he was told by Trump there was no quid pro quo in the administration’s dealings with Ukraine and that he was unaware of one related to the security assistance.

Sondland did not connect Trump directly to the effort, but his reversal adds to the growing body of evidence that the Trump administration sought to use security assistance as a cudgel to press for the investigations — undercutting talking points by the administration. At the same time, he’s hardly a star witness; his decision to walk back his claims undercuts his credibility. Sondland’s clarification came only after other witnesses gave testimony that conflicted with his original statements.

Meanwhile, Volker testified that the hold up on security assistance was unusual but downplayed its connection to the broader push for investigations, saying he was not aware of any U.S. officials communicating to Ukraine that the aid was being withheld for a specific reason. Indeed, Volker said he was never aware of a reason for the hold up.

The White House issued a statement claiming the transcripts “show there is even less evidence for this illegitimate impeachment sham than previously thought.” White House press secretary Stephanie Grisham pointed to Volker’s statement, saying it proved “there could not have been a quid pro quo because the Ukrainians did not know about the military aid hold at the time.”

Sondland portrayed himself as naive to the broader scandal

Sondland in his testimony largely painted himself as an unwitting player in the broader scandal that played out with Giuliani and other administration officials, pleading ignorance to the connection between the Bidens and Burisma and other key details.

He downplayed his communications with Giuliani, telling investigators that the two only met once in person and that it was before Sondland took on the ambassador role. The two men spoke on the phone or electronically for only a few minutes at a time, Sondland said, though he did not recall Giuliani mentioning the Bidens.

Sondland also claimed to be naive to Giuliani’s motivations about looking into corruption in Ukraine. He told lawmakers he did not attempt to learn more about why Giuliani was concerned about Ukraine.

The hotelier and Trump inaugural donor turned ambassador at one point even expressed exhaustion with the onslaught of headlines about him as the impeachment inquiry zeroed in on the administration’s actions in Ukraine.

“There's so many stories out there about what I allegedly did or didn't do,” Sondland told lawmakers. “I can't chase every newspaper. I mean, this has been a very bad experience for me.”