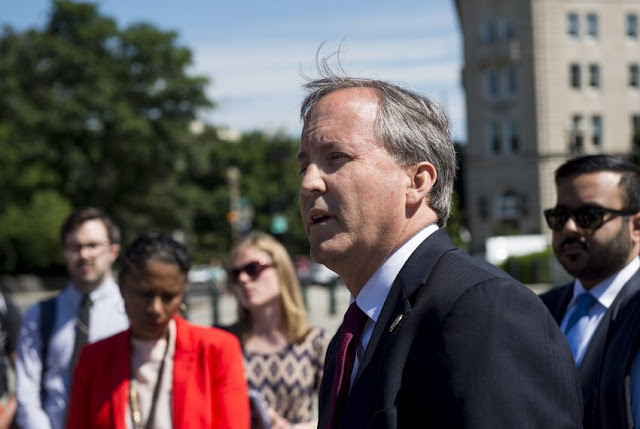 Texas Attorney General Ken Paxton stepped in Friday on a court battle over the medical future of a 9-month-old baby, arguing in a legal filing that the child's family should be allowed to keep their daughter on life support after doctors said she has little chance of ever having a viable life.

Paxton's involvement in the case hinges around a controversial law that allows doctors, with approval from an ethics committee, to end treatment on patients who they feel have little chance of survival, or when further treatment is likely to be futile. In these cases, the Texas Advance Directives Act gives the patient's family 10 days to find a hospital to transfer the patient to before doctors suspend care.

“One of the core principles provided by the United States Constitution is that no person should be deprived of life, liberty or property without due process of law. This unconstitutional statute infringes on patients’ right to life and does not allow patients and their families sufficient notice and the opportunity to be heard before physicians override the rights of their patients,” Paxton said in a statement. “Patients must be heard and justly represented when determining their own medical treatment, especially when the decision to end treatment could end their life.”

Tinslee Lewis, born prematurely at Cook Children's Medical Center in Fort Worth, has spent her entire life at the hospital and has undergone major surgeries to treat her severe heart defect, lung disease and severe high blood pressure. She has been on life support since July, according to a statement from the hospital.

The hospital began talks in September with the Lewis family about transferring Tinslee to another hospital or ending care. Hospital staff has yet to find another hospital that will take Tinslee, with most agreeing that further treatment is futile and may extend or worsen pain and suffering she may already be experiencing. Her family, however, has fought to keep her on life support and got a judge to sign a restraining order against the hospital, forcing it to continue treatment until at least Dec. 10.

"I thought they was going to pull the plug on my baby. I didn't think that she was going to still be here today. And that's what I'm grateful for," Tinslee's mother, Trinity Lewis, said during a press conference Nov. 9, according to CNN, after a judge granted the restraining order. "It was a big relief because I've been running around all week trying to get help until Sunday, and then I finally got what I've been praying for."

Paxton has been a critic of the the Texas Advance Directives Act for years. Various lobbying groups fight over the Texas Advance Directives Act almost every legislative session. Two major anti-abortion groups are often at odds over it, with Texas Right to Life against the law and Texas Alliance for Life in support of it. Former Gov. George W. Bush signed the law in 1999.

Texas Right to Life has been helping provide legal assistance to the Lewis family.

On Nov. 15, the hospital issued a statement saying it would continue care in light of the restraining order but reiterated its belief that further treatment likely would not help Tinslee.

"As medical professionals, our responsibility — our highest duty — is to save lives," the hospital said. "We are still working with Ms. Lewis and Texas Right to Life to find alternative care, however, it is our sincere belief that further medical intervention is not in Tinslee’s best interest. With the temporary restraining order in place, we are continuing to treat and care for Tinslee as we always have. Nothing has changed."