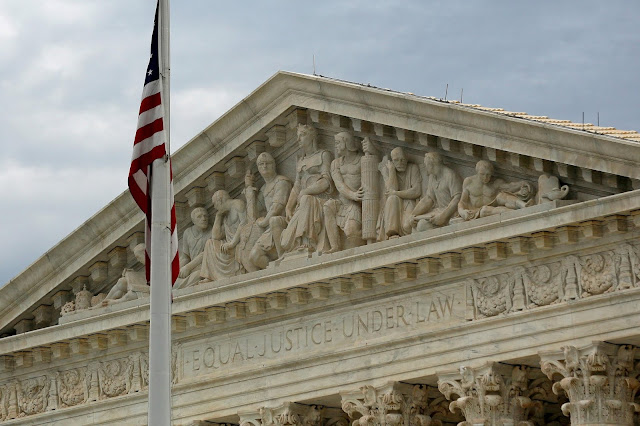 The Supreme Court on Tuesday was sharply divided over President Trump's move to end Obama-era protections for undocumented immigrants who arrived in the U.S. as children, as the justices heard oral arguments in one of the most closely watched cases of the term.

Members of the court’s conservative wing appeared wary of allowing court to review the administration’s decision to begin phasing out the Deferred Action for Childhood Arrivals (DACA) program, which grants deferral from deportation to nearly 700,000 undocumented young adult immigrants.

And questions from conservative justices during oral arguments suggested they appeared to think the administration had supplied legally sound reasons for eliminating DACA.

Justice Neil Gorsuch, a Trump appointee, and Justice Samuel Alito, a George W. Bush appointee, seemed concerned that authorizing a review could give judges too much power over executive agency decisions.

Chief Justice John Roberts, a George W. Bush appointee, who was closely watched as a potential swing vote, also appeared unsure about whether the court had the power to review Trump's decision to terminate the program.

Michael Mongan, the deputy solicitor general of California, who argued alongside Olson for DACA said that the Obama administration's program was consistent with historical deportation-relief programs.

Roberts also pushed back against that assertion, saying previous administrations' programs were far less sweeping in their use of prosecutorial discretion.

“That history is not close to the number of people covered by DACA,” Roberts said.

Justice Stephen Breyer, a Clinton appointee, also appeared uncertain about whether the court had to power to review Trump's decision.

“I'm saying honestly,” Breyer said, “I am struggling to get the right rule.”

At issue for the justices are two overlapping questions: Whether the courts have the right to second-guess Trump's action, and if Trump's DACA repeal was lawful.

But the oral arguments highlighted the sharp ideological split, with many of the court's liberal members inclined to view the DACA repeal as falling within the court's purview.

He told the justices that the Trump administration’s earliest stated reason for the rollback — that DACA was illegal — was without merit, letting administration officials upend the lives of hundreds of thousands of people who relied on the deportation relief program without taking responsibility for the decision.

Justice Sonia Sotomayor, an Obama appointee, was among several liberal justices who questioned whether the administration weighed the impact on DACA recipients, commonly known as Dreamers, who had come to rely on the program. The word “reliance” was mentioned 46 times during oral arguments.

She asked Solicitor General Noel Francisco, who argued the case on behalf of the Trump administration, at what point the administration took ownership of the consequences of repeal.

“Where is the political decision made clearly,” she asked, “that this is not about the law; this is about our choice to destroy lives.”

Breyer seemed skeptical that the Trump administration weighed the fallout of the decision, including beyond those young adults who are DACA recipients.

Breyer, in a question to Francisco, said those groups had raised issues "which are not quite the same as those of the 700,000 who have never seen any other country."

The politically charged case sparked a day of drama in Washington and was one of the most anticipated hearings of the term. Immigration rights advocates gathered on the steps of the court earlier Tuesday morning, where they urged the justices to save the program.

Trump also weighed in on the case just hours before the justices met, blasting DACA recipients, commonly known as "Dreamers."

“Many of the people in DACA, no longer very young, are far from ‘angels.’ Some are very tough, hardened criminals,” Trump said in a tweet.

And the president told the justices that if they let his repeal stand he would work with Congress to pass legislation to address the issue. “If Supreme Court remedies with overturn, a deal will be made with Dems for them to stay!"

Trump has defended his move to end the program, even as he insists that he wants a fix to resolve the issue and allow the Dreamers to stay.

The court is expected to issue a ruling next summer, just months before Election Day.

The oral arguments were only the latest front in a long contentious fight over the program.

The case traces back to 2012, when then-President Obama established DACA through executive action. Roughly 660,000 people are now enrolled in the program, which grants a renewable two-year deferral from deportation, and makes applicants eligible for work permits, driver’s licenses and health insurance.

President Trump, who campaigned on a promise to end Obama’s “illegal executive amnesties,” announced plans in in fall 2017 to rescind the program. The move was met with swift legal challenges. Federal lower court judges in three cases ruled against the Trump administration.

Before the Supreme Court on Tuesday, lawyers for the Trump administration said the lower courts erred. Francisco, the solicitor general, argued that the courts lack jurisdiction to review the repeal, and that their decisions should be vacated.

If the justices decide the repeal is reviewable, Francisco argued, the administration's decision should be upheld as based on legally justified reasons.

Francisco sought to persuade the court that the Trump administration rescinded DACA not only because it believed the program was illegal, but also for legitimate policy reasons.

The agency's rationale was spelled out in two Department of Homeland Security memos, he said, the first of which argued that Obama engaged in “an unconstitutional exercise of authority” when he set up the program in 2012 through executive action.

A second memo provided additional policy reasons, including the administration's stance that a repeal of DACA would deter future illegal immigration.

One question that arose during arguments was whether the second Trump administration memo was an after-the-fact effort to bolster their case in the event the court determined DACA was legal.

Justice Brett Kavanaugh, a Trump appointee, pushed back against an assertion from Mongan, who dismissed the second memo, written then-Homeland Security Secretary Kirstjen Nielsen, as supplying only “boilerplate” policy reasons.

“Well, can I just stop you on boilerplate?” Kavanaugh said. “This is a serious decision. We all agree with that. And it was for the secretary, presumably.

"To say in writing even if it's lawful, 'I nonetheless am going to exercise my discretion,' I assume that was a very considered decision,” Kavanaugh continued.

The Supreme Court’s decision will be guided by a federal statute that concerns how much decisionmaking power federal agencies have.

The Administrative Procedure Act will ultimately govern both of the overlapping issues at play here: if the courts have jurisdiction, and whether the repeal legally justified, or if it was “arbitrary and capricious,” and thus illegal under the act.