Stringent restrictions on freedom of speech at the ballot box 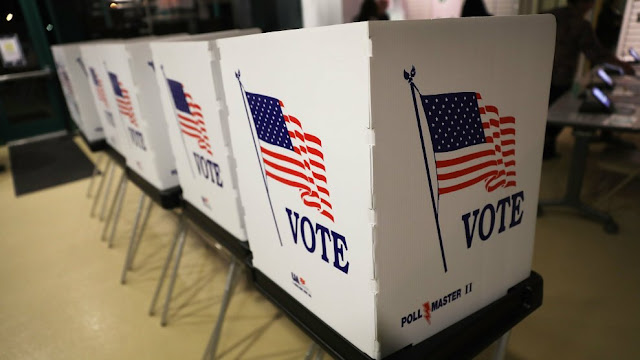 Voters across the country know tomorrow is Election Day. But what they probably don’t know is that when they go to vote, they’ll be subject to stringent restrictions on their freedom of speech from the moment they arrive at their polling place. Free speech may be one of our nation’s bedrock civil liberties under the First Amendment, but some states appear to have decided it has no place in the voting booth.

Texas is a case in point. The Lone Star State’s restrictions on polling place speech are particularly stringent — and likely unconstitutional. When they enter a polling place, Texans can’t wear anything related to a candidate, issue or political party, including anything that has been on the ballot in the past, is currently on the ballot or might be on a future ballot. But it turns out that could mean almost anything, as repeated cases have illustrated:

In the 2018 midterm elections, Dallas County resident Tony Ortiz wasn’t allowed to vote because he was wearing a “Make America Great Again” hat, even though President Trump wasn’t on the ballot that year.

In Houston, Jillian Ostrewich had to go to the restroom and turn her t-shirt inside out before she could vote, because she was wearing a Houston firefighters t-shirt in the same year that voters were considering a ballot proposition on firefighter salaries.

In 2008, a Houston woman wearing an Alaska souvenir t-shirt sparked the ire of an election judge who thought her shirt was promoting then-presidential candidate Sarah Palin.

Four years later, a central Texas voter was forced to cover up a “Vote the Bible” shirt because it might be offensive to others, and in 2016 a San Antonio man spent a night in jail after refusing to remove his “Basket of Deplorables” t-shirt.

It seems absurd to think that a mere “Black Lives Matter” or “Support Our Troops” t-shirt might be considered a threat to peace and decorum, but polling place restrictions know few sensible boundaries. For example, nearly half of U.S. states, including North Carolina, Tennessee and Texas, prohibit voters taking “selfie” pictures when casting their ballots. Singer Justin Timberlake famously broke Tennessee law in 2016, when he posted a ballot selfie simply encouraging his Instagram followers to vote. These restrictions are particularly laughable in an era when smartphone cameras, wireless connections and social media networks are ubiquitous.

But all these states that place speech restrictions on voters are likely to find that they’re running afoul of the Constitution. Here’s why: In 2018, the Supreme Court struck down a Minnesota law that banned all political apparel in the polling place. The Minnesota law was so all-encompassing that even a voter wearing a Boy Scout leader’s uniform could be in violation, given the political debate surrounding that organization. Apparel supporting the American Civil Liberties Union, the World Wildlife Fund, AARP and even Ben & Jerry’s were deemed problematic, since those organizations take political stances.

In Minnesota Voters Alliance v. Mansky, the court held that such laws must be reasonable, with some rational basis for determining what is allowed and what isn’t. Otherwise, the laws violate voters’ First Amendment right to free speech. Broad bans on speech at the polling place fail that test.

States do have an interest in maintaining peace and order at polling places, which is why most states put some limit on electioneering. It’s why you’ll often see a dense flock of yard signs that runs right up to the 100-foot buffer outside the polling place door, or why a candidate’s supporters can wave from the parking lot but not follow you inside.

But when the laws are broad, vague and unpredictable, they place entirely too much unaccountable discretion in the hands of local election officials. As a result, constitutional violations of voters’ speech rights are bound to follow.